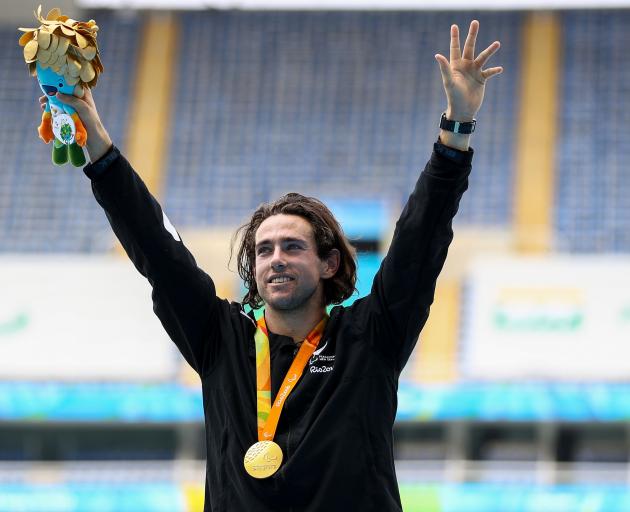 Liam Malone of New Zealand celebrates after winning gold in the Men's 400m T44 final and setting a new world record of 46.20 seconds in the process at the Rio 2016 Paralympic Games, being held at Olympic Stadium in Rio de Janeiro. Photo: Getty
Liam Malone has powered to his second gold of the Paralympics by convincingly winning the Men's 400m T44 in Rio this morning.

Malone showed his true power moving through the race and was just too strong to cross the line ahead in a Paralympic record of 46.20 seconds - beating Germany's David Behre (46.23) and American Hunter Woodhall (46.70).

"It's a tough race. It was at the end of the Games and I was feeling shattered going in," Malone told Newstalk ZB's Rachel Smalley on Early Edition.

"I knew these boys were fast and I knew I had the top-end speed so I went out hard and I knew I was it was going to be 'kill or be killed' so coming into that last bend I just put the foot on the gas and did my best to not crumble down the back straight which is what happens to most people."

The 22-year-old got his first set of blades following the support of the New Zealand public, who donated to a crowd funding site to the tune of $20,000.

Malone said he'll celebrate his success before deciding on what he'll do next in his career.

"I'll go out and celebrate with some friends and brainstorm what's next. I'm here to collect as many experiences as possible in this life and we'll see what happens next."

Elsewhere the day started with Scott Martlew making Paralympic history in the first ever Men's KL3 Para-Canoe final at a Paralympic Games and for Martlew. He finished eighthin a close field that saw only a four second difference between Martlew and gold medallist Yemelianov (Ukraine). Martlew was called up to the New Zealand Paralympic Team only two weeks ago following the Russian suspension.

Paralympic debutant Jesse Reynolds missed qualifying for the the Men's 100m Butterfly S9 final after swimming a personal best time of 1:04.50 placing fifth in his heat.

The final Kiwi in action this morning was Mary Fisher in the Women's 100m Freestyle S11 placing third in her heat and heading into this morning's final ranked fifth overall.