Moroccan former heavy smoker in the running - all day 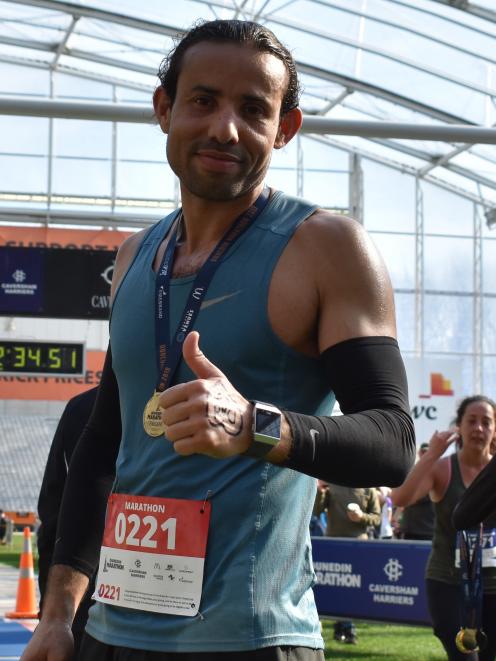 The 37-year-old dispatch clerk, now based in Hamilton, was told by a friend that the Dunedin Marathon started at 6.30am, so figuring his run would take 3hr, he reckoned he would have plenty of time to catch a 12.30pm flight back to Auckland from Dunedin. But when El kamraoui picked up his race pack he discovered that 6.30am was the time the bus departed the Sargood Centre for the marathon start at the Albatross Colony for what was in fact a race start of 8am.

Realising this was cutting things a bit fine in terms of finishing and getting out to Momona to catch his return flight, El kamraoui was under pressure to run 3hr or better, meet up with an Uber driver and be at the airport to catch his flight, leaving little time to freshen up or change.

Despite his post-race battle with time El kamraoui made it to Momona in time to catch his flight, vowing to return again next year, despite the drama.

A packet-a-day smoker until three years ago, El kamraoui took three attempts to kick the habit, turning to a combination of gym work and running.

Now with a finely toned physique and a goal of contesting every marathon in New Zealand, he has in the past three months run four marathons, beginning with Christchurch at Queens Birthday in which he clocked 2hr 59min 16sec to finish 53rd, then 14th place in the Wellington Marathon in late June with a time of 2hr 58min 4sec and then second place in the Taupo Marathon early last month with a personal best of 2hr 57min 30sec.

In yesterday's Dunedin Marathon he finished 12th with a time of 3hr 21sec.

Catching up with El kamraoui after he finished yesterday could only be likened to a triathlon transition, as he searched for his race pack and ran out of the stadium with his Uber driver.

"It is a very good course and a little bit challenging at the start. You have to run it smart", he said.

"But it's beautiful and scenic. I really enjoyed the run. And a beautiful city. I'm really happy to be here and will be back next year if I'm without injury and prepare well. I now know how to run the course next time. To be honest. It's a beautiful city. I would love to come again. But I will come a better way next time."