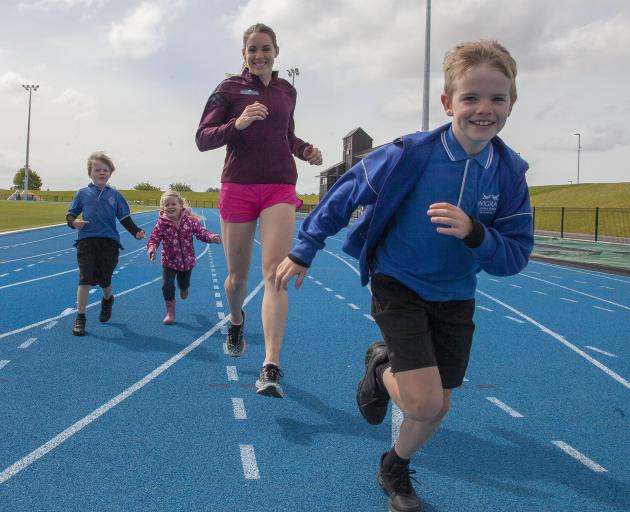 Helena Dinnissen with her children Kees, 9, Evelyn, 4, and Imri, 6. Photo: Geoff Sloan
Helena Dinnissen is living proof becoming a mother does not mean having to give up pursuing a lifelong dream.

After a long battle with anxiety and depression throughout her 20s, the Wigram resident, 35, decided to start over with a sport she loved as a teenager two years ago.

Now Mrs Dinnissen, a mother of three, has had her biggest sporting achievement yet – winning nine gold medals in the Oceania Masters Athletics Championships.

It is the biggest medal haul in her career with her winning nine golds.

“It felt pretty crazy amazing, some events, in particular, I was genuinely blown away with my results, and especially proud of the records I broke,” Mrs Dinnissen said. 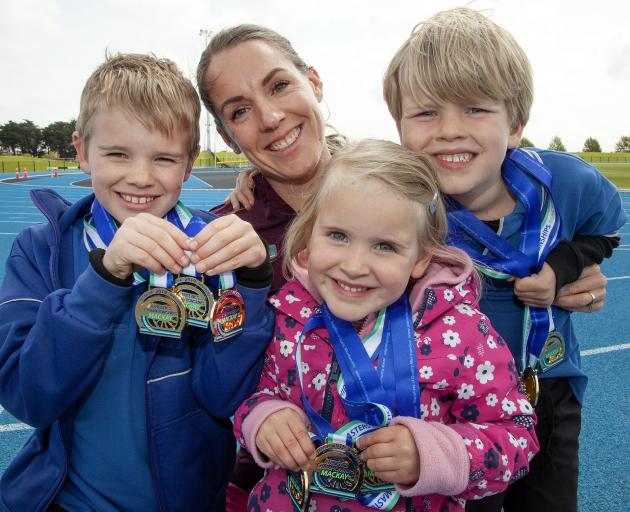 “I’m only 1.68m tall, and my previous best was 1.55m so this was a huge improvement and to jump over my height just blew me away. I honestly never thought I could do that”.

Her goal is to now become ‘New Zealand’s fastest mum’ with her set to compete in the World Masters Athletics Championships in Toronto next year.

She is currently training six days a week for about one-and-a-half to two hours each day in the lead-up to the event.

Mrs Dinnissen is training to compete in the heptathlon (200m, 800m, long jump, high jump, 100m hurdles, shot put and javelin) and said she “would love to win”.

“I hope to medal in all of them, of course golds would be amazing,” she said.

Although she loved athletics as a teenager, throughout her 20s, Mrs Dinnissen struggled with low self-worth, depression and anxiety.

“I never knew how to ask for help, or have the skills to persevere. It was heart-breaking to be honest, I regretted it all my 20s that I had not pursued a sporting career,” Mrs Dinnissen said.

She also believed she could never pursue her sporting dreams after starting a family at 25.

But at 32-years-old, following her third child, Mrs Dinnissen decided she wanted to get moving again.

“I had been doing so much work on myself mentally and finally had the strength to fight. It started with a jog and has turned into this”.

Mrs Dinnissen is encouraging other mothers to get into athletics.

“I am totally biased, but yes, there is something for everyone. I think when you start competing and get times it gives you a focus, to work towards and challenge yourself rather than exercising just for the sake of it.”

On top of juggling training and raising three children, Mrs Dinnissen runs a small fundraising business targeted at pre-schools, schools and charities which turns photos and artwork into jewellery and key-chains.

Mrs Dinnissen will need $20,000 to cover both the trip to Toronto and training leading up to the event.