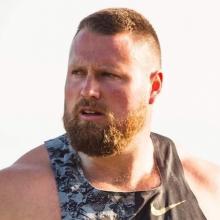 Tom Walsh
National 800m champion James Preston repelled the challenge of Tokyo Olympian Sam Tanner to provide a rousing finale to the International Track Meet at a blustery and chilly Christchurch on Saturday.

Despite the challenging conditions, the 24-year-old Preston managed to secure the third-fastest 800m time in his career and a meet-record time of 1min 47.31sec, which sets the Wellington Scottish athlete up nicely for next week’s New Zealand championships.

On his seasonal debut, Tanner will also be encouraged to have trimmed 0.28sec from his lifetime best to clock 1min 48.35sec for second.

Tanner, better known for his exploits as a 1500m runner, stuck limpetlike to Preston until the final 100m or so when Preston eased clear and even afforded a little fist pump of joy in the final strides.

“It was very windy, but I was pleased with how I ran,” Preston said.

“It was good to race a couple of quick guys out there, including Sam, because that quality is probably what I have been lacking so far this season.”

Christchurch’s Tiaan Whelpton recorded a slick 20.70sec for a crushing win in the men’s 200m. Helped by a huge +4.9m/s wind, the long-striding sprinter showed he is a more than handy exponent over the half-lap, having spent much of the season on the 100m, equalling the New Zealand resident record of 10.18 in Hastings in January.

Georgia Hulls ran a scintillating 23.01sec to narrowly retain her unbeaten record in the 200m by just 0.02sec from Rosie Elliott.

Double Olympic bronze medallist Tom Walsh was shy of his best winning the men’s shot put with 20.71m in round three.

Tapenisa Havea (18, South Canterbury) again excelled in the women’s shot, unleashing a winnng throw of 15.63m to come within 29cm of her lifetime best.

The windy conditions favoured the discus throwers as Tatiana Kaumoana three times surpassed her pre-event best to fire the 1kg discus out to 56.51m to climb to fourth on the all-time New Zealand lists.

Christchurch-based Katherine Camp showed all her experience in the 800m to launched a fearsome kick with the wind at her back and went on to claim a convincing win in 2min 8.94sec.

Olympic triathlon bronze medallist Hayden Wilde battled to a pulsating victory from 19-year-old Chanel Muir in a titanic showdown in the men’s mile.

Wilde, the New Zealand 5000m champion, slipped behind the Christchurch Avon athlete late in the race but responded from the inside rail to win by just 0.07sec in a time of 4min 9.24sec.

Teenager Penelope Salmon gave another demonstration of her endurance gifts by claiming a decisive win in the women’s mile in 4min 48.93sec.

In the women’s hammer, Tokyo Olympian Lauren Bruce was a little off her best, breaking the turf with a best of 65.88m.

Unimpressed by the cold and windy conditions, Tokyo Olympian Hamish Kerr opted to take a cautious approach to preserve his body for future competitions by winning the men’s high jump in a meet record of 2.10m with his only jump.

Keeley O’Hagan (Christchurch Old Boys) maintained her flawless winning record in 2022 by winning the women’s high jump with a meet record of 1.78m.