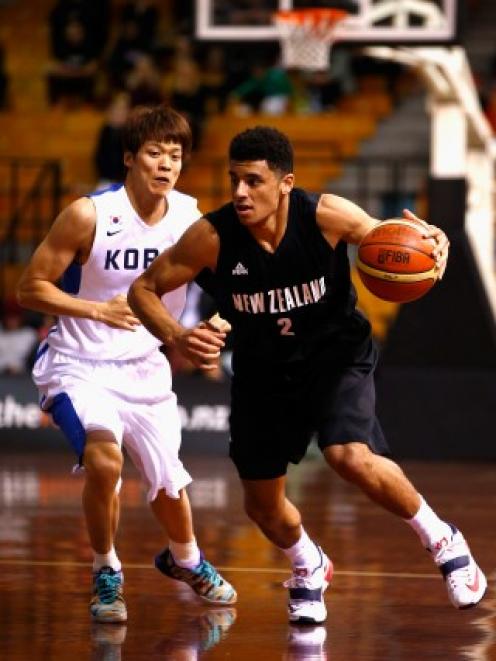 Tai Wynyard takes the ball forward for the Tall Blacks against South Korea in Auckland in July last year. Photo by Getty Images
Breakers development player and young Tall Black Tai Wynyard is set to attend one of the top basketball schools in the US, committing to the Kentucky Wildcats in 2016.

The 16-year-old, who starts back in his final year at Rangitoto College today, made his decision after a week-long trip to the US this month, where he also fielded scholarship offers from Villanova University and Texas University.

Kentucky has the most successful basketball programme in NCAA history, with the most all-time wins and the highest winning percentage. The Wildcats are the top-ranked men's team in the United States this season with a perfect 19-0 record and are favourites for another NCAA crown.

But the programme has also come under attack for its use of "one-and-done" players, with critics arguing Calipari has taken advantage of NBA rules that require players to be one year removed from high school in order to be eligible for the NBA Draft, turning the University of Kentucky into a "basketball way station".

Wynyard, who admits to knowing little about the American college game, said Kentucky's reputation for preparing players for the NBA was a key factor in picking the Wildcats.

"That's the number one place for getting people to the NBA," Wynyard told Kentucky's Courier Journal. "That's something I've wanted to do since I was a little boy."

Wynyard attended the Wildcats' home win over Missouri two weeks ago, giving him his first up-close look at a US college game and the world-class programme at the University of Kentucky.

"Kentucky seemed like the best fit for me," he said.

"They are going to push you to their max no matter who you are or what you do. If you are the best player in the country or the world, they're going to push you. That's the thing that really got to me. No other college really said that to me, and that's why I chose them."

The 2.06m power forward is the first member of the 2016 class but that could change if he reclassifies and enrols at Kentucky for next season after finishing his studies in December -- midway through the NCAA season.

Wynyard, one of last year's Herald Future Stars of Sport award winners, became the youngest Tall Black when he took the court against South Korea last July, and trained with the extended squad prior to the FIBA World Cup, before missing the final cut.

American recruiting interest in Wynyard picked up after he participated in the Jordan Brand International all-star game in New York last year, and he and his parents began to exchange emails with college coaches.

Wynyard is part of the Breakers squad, but doesn't get paid or travel with them, so as to protect his amateur status and NCAA eligibility.

His athletic prowess is no doubt assisted by his parents, Jason, who was a world champion wood chopper, and Karmyn, who played for the Tall Ferns.

Word of his wood-chopping lineage spread quickly while he was attending the Wildcats game, prompting fans to call him "The Lumberjack".

While it is a nickname that may stick, Wynyard assured the local media that his wood-chopping days were long over. "I didn't want to cut my toes off," he said.