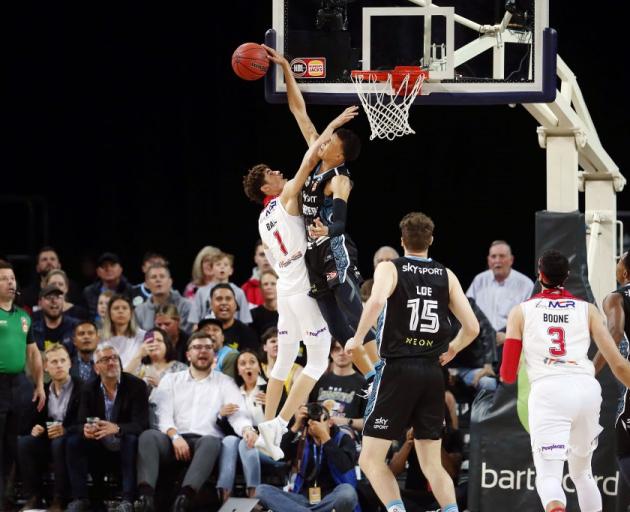 RJ Hampton blocks LaMelo Ball during the Breakers win over the Hawks last night. Photo: Getty Images
Round one to RJ Hampton.

With NBA scouts among the 8000-plus in attendance at Spark Arena tonight, RJ Hampton out-duelled fellow NBA prospect LaMelo Ball in their first meeting of the season, leading the New Zealand Breakers to a 103-72 win over the Illawarra Hawks.

While it was an impressive performance to get the team off the mark in their campaign, it wasn't without its issues.

Stoic centre Rob Loe was forced from the court after sustaining a possible skull fracture from a collision with Ball in the first quarter, and did not return to the game.

Breakers head coach Dan Shamir did not want to go into too much detail on Loe's injury after the game, saying it was too early for him to speculate, but did confirm Loe was in hospital with a "serious" injury.

He was happier commenting about Hampton, who showed he's getting more comfortable running the Breakers offence, as he didn't hesitate in attacking the hoop and finding open teammates on the perimeter.

But while the scouts were there largely to take stock on Hampton and Ball, it might have been Breakers forward Scotty Hopson and guard Sek Henry who made the biggest impressions. The two combined for 38 points, shooting an efficient 7/12 and 7/11 respectively.

From the opening buzzer Hampton set the tone, meeting Ball at the rim and sending back his counterpart's first shot of the game.

After a lacklustre shooting performance in their loss against the Sydney Kings on Sunday, the Breakers turned things around in a big way – draining eight of their 13 three-point attempts in the first half, and 17 of 37 in total.

Surprisingly it was Hawks guard Aaron Brooks, the NBA's most improved player in 2010, who was facing the brunt of the Breakers' attack.

The 183cm guard constantly found himself switched into a mismatch against the 200cm Hopson, who used his size advantage well.

But it wasn't just Hopson scoring on Brooks. Despite the Hawks guard playing good defence around the arc, the Breakers shooters were taking on the challenge and winning almost every time.

While Hampton and the Breakers soared, it was a different story for the Hawks.

Ball struggled to get going offensively – missing his first seven shots. Brooks did what he could to keep the scoreboard ticking over for his side, but by halftime the Hawks faced a 17-point deficit.

The Breakers did their best to let the Hawks back into the game in the third quarter, committing five team fouls in less than three minutes of the half getting underway – giving the Hawks more than six minutes in the bonus.

Luckily for the Breakers, they didn't cool off at halftime and instead extended their lead to 27 at the end of the third quarter, going on to close out the game with ease.