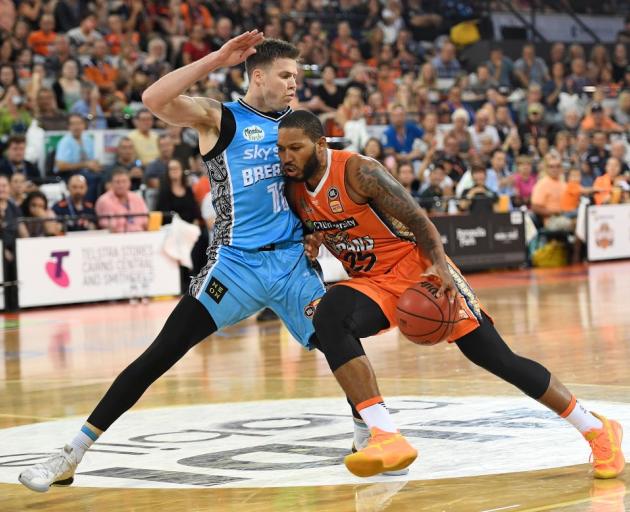 Taipans guard DJ Newbill drives at Breakers forward Tom Abercrombie. Photo: Getty Images
The New Zealand Breakers' winning streak is no more, and it was a familiar face playing a major role in bringing it to an end.

After five straight wins, the Breakers suffered a setback away to DJ Newbill and the Cairns Taipains, going down 85-79.

While Taipans guard Scott Machado claimed man of the match honours with his 29 points, Newbill's defensive effort on Breakers star Scotty Hopson showed why he is being touted as the best defender in the competition.

The former Breakers guard did have 20 points of his own, but his pressing defence force Hopson into difficult situations all game, with Hopson committing 10 turnovers on the night.

Despite Hopson being hindered by Newbill and Sek Henry out with injury, the Breakers will leave Cairns knowing they let the game slip.

With both teams trying to improve their claim for a spot in the playoffs, the game was expected to be a tight affair. That proved to be the case.

The Breakers got the best of the opening stanza, led by centre Rob Loe who ended the night with a career-high 24 points. After building a five-point lead by the end of the first quarter, the visitors found themselves trailing by six at halftime.

The second half played out in a similar pattern; with the Breakers starting out the better of the sides to draw the scores level heading into the final quarter.

It seemed like the Breakers were up for a strong finish, continuing their third-quarter charge at the start of the fourth to build a seven-point lead with less than five minutes to play.

That's where the wheels came off.

The Taipans went on to outscore the Breakers 14-1 in the final 4min 54sec of the game to close out the win.