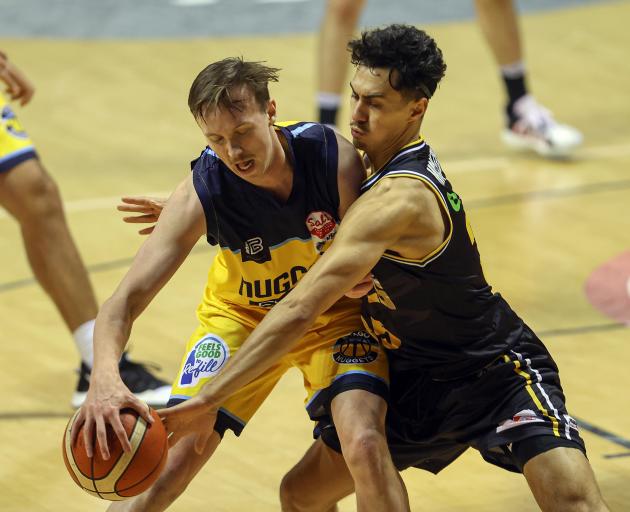 Otago Nuggets swingman Joshua Aitcheson (left) and Franklin Bulls guard Nikau McCullough tussle for the ball during their NBL match in Auckland last night. PHOTO: PHOTOSPORT
It was an Otago player who did the damage.

Unfortunately, he was not wearing a Nuggets uniform.

Sam Timmins was a monster inside as the Franklin Bulls beat the Otago Nuggets 85-79 in Auckland last night.

The former Otago Boys' High School centre claimed 24 points and 12 rebounds to condemn the Nuggets to a second loss in as many days in the National Basketball League Showdown.

He scored 11 of those points down the stretch, allowing the Bulls to pull away after the scores were tied with just over three minutes left.

Containing the league's top big men was always going to be a challenge for the small Nuggets side.

The side nearly did just enough.

After falling behind early, it pulled it back late in the second quarter before taking a lead in a brilliant third quarter.

But the ball began stick for the Nuggets in the fourth.

They tried to get star Jordan Ngatai involved, but quality shots were proving hard to come by for the star.

He finished with 15 points, while versatile big man Jordan Hunt proved the most potent scoring threat with 18 points.

"We thought we were in the game right down to the stretch," he said.

"Then a few defensive lapses — Sammy Timmins making sure his mates from school knew he could still play basketball.

"He really stood up tonight and created some major issues for us."

He said the league was more physical than he had expected.

Getting a better understanding of where the line was as to what it was able to do defensively would be key.

He felt that was where the side was struggling, alongside needing to establish more fluidity on offence.

Size was a focus from the outset.

Teenage centre Jack Andrew was inserted into the starting line-up alongside Hunt, while the team came out in a zone.

It started well too, although as the offence stalled the Bulls were able to open a 23-17 lead.

That continued early in the second, as the Nuggets leaked offensive rebounds and soon faced a double-digit deficit.

They pulled that back though and a Darcy Knox three, followed by a Ngatai floater, made it 37-35.

That resurgence continued in the third.

As Ngatai exited for the remainder of the quarter early, after picking up a third foul, Josh Aitcheson (13 points) stepped up.

The swingman took control of the game through both his passing and scoring.

The ball began moving too and the energy lifted.

When Aitcheson came off an on-ball screen to hit a three the Nuggets finally took a 53-52 lead.

That gap opened to five not long after when Knox hit a floater to make it 61-56.

However, it could not pull away.

The game remained close throughout the fourth.

But it was the Bulls who executed and brought far more energy down the stretch.

The inability to stop Timmins, a couple of big shots from Isaac Davidson (13 points) and the stagnant offence hurt the Nuggets.

The Bulls led 73-71, before a three to Timmins followed by two baskets inside opened the gap to 80-71 - one the Nuggets never pulled in.

In the late game, the Canterbury Rams bounced back from a first defeat on Wednesday to beat the Nelson Giants 90-97.