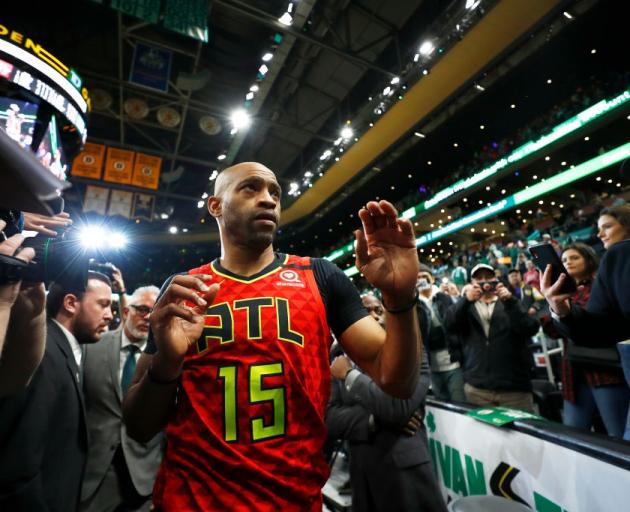 Vince Carter leaves the arena after an Atlanta Hawks game in Boston earlier this year. Photo: Getty Images
Vince Carter has announced his retirement from the NBA, bringing an end to a 22-year career - the longest of any player in league history.

He made the announcement on the Winging It podcast, saying, "I'm officially finished playing basketball."

Carter (43) was the No 5 overall pick in the 1998 NBA Draft and played his first six-plus seasons with the Toronto Raptors, winning the Rookie of the Year award in 1999 and the NBA Dunk Contest in 2000. He made eight consecutive All-Star teams from 2000-07.

NBA commissioner Adam Silver said in a statement, "Vince Carter has made an indelible impact on the NBA with his remarkable skill and enduring commitment. For a record 22 years, he played with pure joy and created so many memorable moments as an eight-time All-Star, a Slam Dunk champion and an Olympic gold medalist. We congratulate Vince on a storied career and thank him for being a true ambassador of the game."

"Over the last two years, Vince Carter has been a committed leader, respected mentor and influential example on the court, in the locker room and in the Atlanta community," the Hawks said in a team statement.

"Throughout his historic 22-year journey covering an unprecedented four different decades, his evolving career arc was perhaps like none other in league history -- from Top 5 Draft Pick to Rookie of the Year to Slam Dunk Champion to superstar and eight-time All-Star to Twyman-Stokes Teammate of the Year and valuable role player. It's an honor to the Hawks organization that he completed his Hall of Fame career wearing Atlanta across his chest and representing our city."

The North Carolina product played 60 games for the Hawks in the 2019-20 season, averaging 5.0 points in 14.6 minutes per game. The Hawks are not among the teams who will finished the coronavirus-interrupted season near Orlando, Florida, beginning next month.

He scored five points in his final career game, an overtime loss to the New York Knicks on March 11 -- the day the season was suspended.