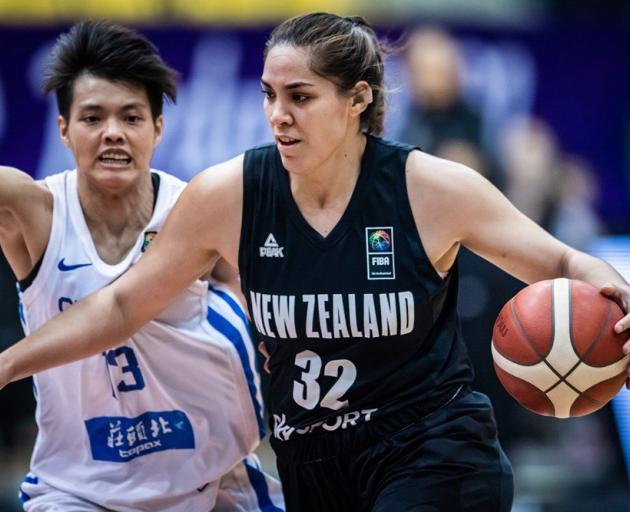 Dominant displays from Kalani Purcell (12 points, 10 rebounds, four assists and four steals) and Penina Davidson (26 points and seven rebounds) ensured New Zealand would get the better of a team ranked two places higher (No36) on the Fiba women’s rankings.

Mary Goulding (six points and eight rebounds) was given her first start at the tournament and was typically active as New Zealand forged a 9-4 lead.

Davidson had success from the post in the opening five minutes, but Chinese Taipei was able to disrupt the supply to the Tall Ferns’ bigs, and with some accurate mid-range shooting had tied proceedings at quarter time (16-16).

Brooke Blair had the final say of the first half with a deep jumper, although it was Davidson (11 points) who led all scorers at the interval — the Tall Ferns ahead 38-29.

New Zealand began the second half with an 8-0 run and when Davidson found nothing but net from beyond the arc, her team was 49-32 to the good.

Chinese Taipei made a 7-0 run of its own to get back into the contest before Ash Karaitiana made back-to-back scores, and the Tall Ferns had a 12-point buffer (56-44) at the last break.

Coach Guy Molloy reverted to his starters at the start of the fourth period and the move worked a treat.

The quintet of Goulding, Purcell, Davidson and the Leger-Walker sisters not only put the defensive clamps on Taipei but consistently picked holes in the opposition’s defence.

Forwards Davidson and Purcell were dominating the paint at both ends of the floor and when Goulding’s hustle was rewarded with two points, the Tall Ferns were sitting pretty, ahead 68-48 with just five minutes to play.

Molloy rewarded his bench players with deserved minutes in the closing stages as his team wrapped up its participation at the tournament with a win.