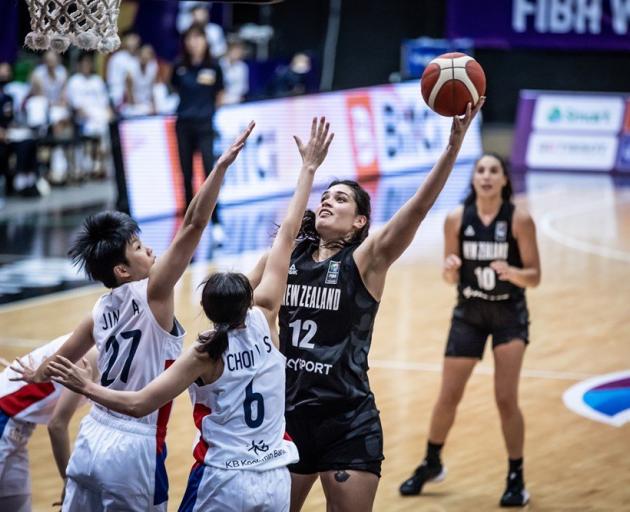 The loss can be put down to their extensive foul count and lacklustre shooting which let their opposition off the hook after several strong defensive stands.

A big night (29 points and eight rebounds) and third quarter (4/5 three-pointers) from South Korean forward Isaem Choi was another notable headache for the New Zealanders, who up until the second half had done a solid job of limiting the baskets from outside.

South Korea started strongly and showed a balanced attack with four of the five starters claiming buckets in the first 10 minutes.

The insertion of Boagni midway through the spell paid dividends almost immediately as she went to work down low. A couple of field goals from the forward along with some handy shooting from Ash Taia made it 24-20 to South Korea after the first quarter.

It was close to the same script coming out of the first break as the Koreans pushed the pace.

The Tall Ferns struggled to get their jump shots to drop but identified some vulnerability in close and began to feast, 24 of their 38 first-half points coming from inside the paint.

Fouls were detrimental to their cause on the defensive end, though, as they handed their opposites 18 chances from the charity stripe, 16 of which found the bottom of the net.

Those freebies ensured South Korea, which had a poorer field goal percentage at that stage, led 46-38 at the half.

A Mary Goulding three just after the interval drew some much-needed applause from her New Zealand team-mates on the pine, but her make from distance was superseded by four triples from Choi.

Choi scored 16 points in the third quarter and bumped her side’s advantage to 13.

The Tall Ferns tried admirably to put a dent in the deficit in the final spell, but their output was matched and bettered by the Koreans.

There was no time to dwell on the result as the Tall Ferns were playing Japan last night. The Japanese trounced India 136-46 in the opening round.