'Frustrated' at Adams' lack of communication 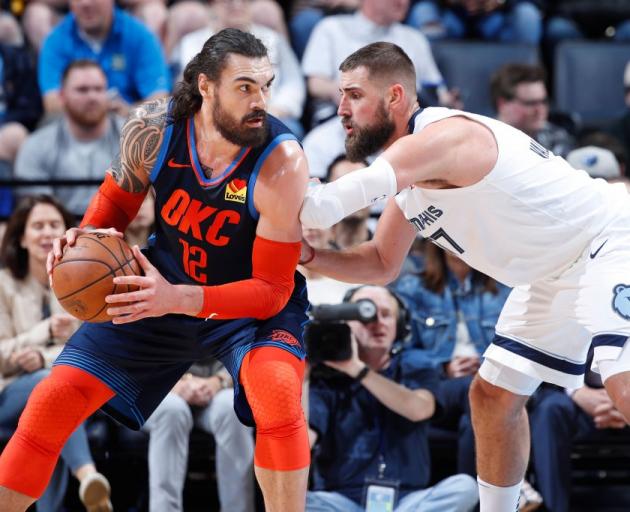 The Oklahoma City Thunder centre yesterday confirmed he won't play for the Tall Blacks at the Basketball World Cup in China later this year - after he was last week named in a 25-man wider squad for the tournament, which begins at the end of August.

Adams, who is believed to be in Wellington after the Thunder's heartbreaking NBA playoffs loss to Portland in April, confirmed through a two-line statement from his agent Darren Matsubara that he won't be taking any part.

In an interview with Radio Sport's D'Arcy Waldegrave, Iain Potter, chief executive of Basketball New Zealand, highlighted the organisation's frustration with what he calls a lack of communication from Adams' camp.

"There is an element of frustration about it because it would be good to be able to have Steve in the team at some stage," Potter said.

Asked if he had been given a reason for Adams' continued unavailability, Potter said he hadn't.

"It's hard to know, in all honesty. That [statement] is really all we know. We included Steven on the long list last week because at that stage he [Matsubara] hadn't said that he wouldn't play. Then, a couple of days ago, we received that two-line statement saying he wasn't available."

Despite the umpteenth snub, Potter says Basketball NZ remain hopeful that the 25-year old would someday represent his country.

"We were hopeful for a period of time, largely because his agent wasn't saying 'no'. That always allows the growth of hope. The good thing is now we know where Steven stands in terms of being available this year and we can now just move on and put the speculation aside," Potter said.

"We have 24 other guys left on the list busting their boilers to get into the team, and that's our focus now."

After snubbing coach Paul Henare's advances ahead of the Fiba World Cup qualifying games against Hong Kong and China last year, the New Zealand Herald reported Adams decided to turn his back on the national side as a 15-year-old when he couldn't pay "thousands of dollars" to represent his country.

Sources close to the 25-year-old told the Herald Adams' continued Tall Blacks exile stems from when he was forced to withdraw from the Junior Tall Blacks' 2009 World Cup campaign.

Adams - born in Rotorua and then educated in Wellington before heading to the United States to better his studies and chase his basketball dream - has been New Zealand's best sporting export to the US since making his NBA debut in 2013.

He is on a long-term NBA contract with OKC valued at more than $140 million.

Potter insists he doesn't have any knowledge of Adams' reported gripe with the organisation.

"We had more clarity in his early years at OKC when they were quite clear that they didn't want him playing international basketball in his apprentice years. In recent years, though, they have made it clear that isn't a barrier," Potter said.

"We don't really know. We hear rumours and people speculate as to why he might or might not play but we don't know any more than what's in that statement."