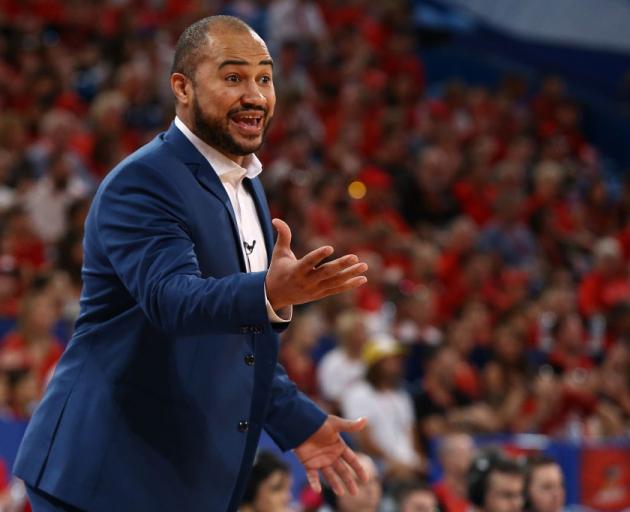 Kevin Braswell will coach the new Auckland-based Huskies. Photo: Getty Images
In a stunning development for the NBL, the Southern Huskies are moving from Australia to be permanently based in Auckland and become the Auckland Huskies.

The first mission for the re-badged team will be the touted 2020 competition, which the league is set to announce early next week.

Braswell will team up with new Huskies manager Matt Lacey, an award-winning coach in his own right with a national championship and adding the 2018 Basketball New Zealand coach of the year award to his career.

With news that a reformatted 2020 competition was being planned, coupled with growing business interests in New Zealand, the Huskies decided this opportunity was too good to resist.

Member of the Huskies ownership group Mike Sutton said he is pleased his group was able to bring forward its original plans.

"We've been speaking with the NBL since last year. We always intended to keep our franchise license alive and had started planning for a move in 2021," said Mr Sutton.

"We heard about the possibility of a competition in 2020 and we really liked the creative approach the League had taken during a difficult time. We saw an opportunity to speed up the process and give something back to the League, and to the basketball fans in Auckland."

Sutton said the Huskies have a chance to forge new ground, represent a great basketball city and help develop lots of positive relationships across New Zealand.

"Every time we travelled to New Zealand, we loved it. The hospitality and support shown was fantastic, we were welcomed with open arms and that really became the biggest factor when we started looking at relocating. We already felt like family.

"The NBL Board and management have been so good to work with and we appreciate their support in helping us bring the Auckland Huskies to life. We can't wait to get started.

"We aim to have local staff, coaches, players and community partnerships. We also intend to quickly open up ownership opportunities for others to come and join us in owning and operating the Auckland Huskies."

The NBL will announce further details about the new look 2020 competition early next week.