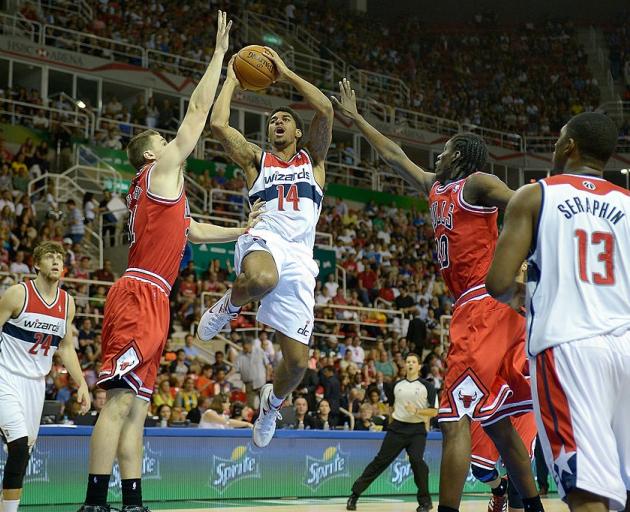 New Breakers signing Glen Rice Jr takes the ball to the hoop for the Washington Wizards against the Chicago Bulls during his NBA stint. Photo: Getty Images
The New Zealand Breakers have brought in a former NBA player as injury cover.

Glen Rice Jr has joined the team while Scotty Hopson recovers from a split ligament in his knee, sustained during last Thursday's match against the Cairns Taipans.

There is no definite date for his return.

As Rob Loe and Finn Delany are also injured, the Breakers have called in Rice as cover.

The 28-year-old shooting guard has had stints with the Philadelphia 76ers and Washington Wizards.

He also shone under the guidance of Breakers coach Dan Shamir at Hapoel Holon last year.

“I remember very vividly we put him in the first game after we signed him and immediately everyone on the team realised what he can do for us and his effect on our team as a whole,” said Shamir.

“Very quickly we became probably the strongest and most exciting team in the league and I’m definitely hoping he will bring the same thing to the Breakers.”

Shamir acknowledges Rice has sometimes struggled in his career to be a model professional off the court.

“Everyone who knows Glen, or can Google his name would see he has had a few incidents in his career.

"But my personal experience with him is his ability to create a winning team and to affect the team in a positive way was way more significant than anything else.

“I am hoping Glen will like it here, I am hoping our team is a great place for players like Glen and for me it’s all about us becoming the best team we can be."

Rice will arrive in Auckland Wednesday and will meet his new Breakers teammates for the first time in the afternoon.

“We know him, I know him probably the most, we took everything into account, and we believe in what he can bring us.”

“The stability and underlying values of the Breakers is exactly the environment someone like Glen needs to focus on being the best player he can be,” Breakers owner and CEO Matt Walsh said.

“This is a unique opportunity for the Breakers and Glen and If we get this right we will be in an incredibly strong position.”