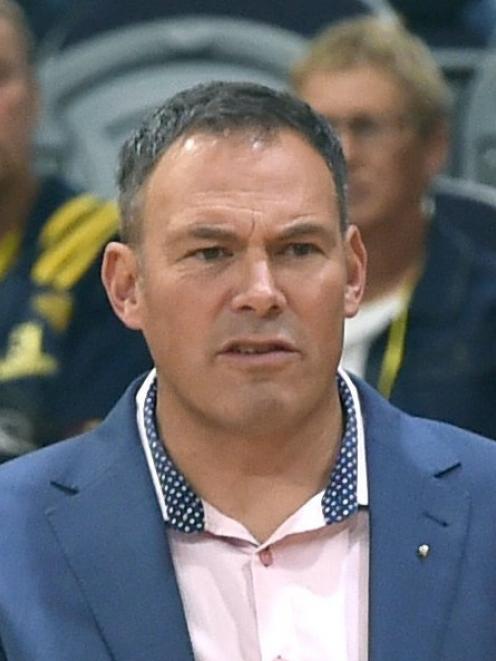 Brent Matehaere. Photo: ODT files
The Franklin Bulls did their homework against the Otago Nuggets - but their formula showed why this Nuggets team is going to be so hard to stop.

But Nikau McCullough seemed to have fallen off their scouting report - and he exploded for 25 points in the first half.

That is how this team will operate.

Defences can contain one threat, even multiple threats.

But it is hard to contain all five players on a court if all five are capable threats.

If you load up on one, that will normally open an opportunity elsewhere - it is just whether the offence can exploit that.

The Nuggets are showing the ability to do that, and it is a large reason why they are joint at the top of the National Basketball League table, going 4-0 since having their full roster.

McCullough is not the only player to have a high-scoring quarter this season.

Todd Withers and Keith Williams have both popped off for 16 and 19 points in a single quarter as well.

The bench has been equally effective, many of last year’s players taking a step up to take advantage of those opportunities.

Crucially, there are players prepared to sacrifice shots and scoring, which is not always the case in a team of stars.

"I don’t think we’re going to be trying to seek that out," Nuggets coach Brent Matehaere said.

"It just happens organically. It’s about just sticking to how we work and the things we do and keep our processes going right.

"I think the thing that stands out is that the players in our team are willing to go back to the players that are hitting those shots.

"We’ve got players that can shoot the ball pretty well, but they’re being unselfish and looking after their team-mates and riding the wave.

"When Nikau was going hot, we had players actively looking to find him."

Often imports can be volume scorers, players who need the ball in their hands and to be getting shots to be contributing.

When these Nuggets stars are not scoring, they are still having a major impact and making this team very hard to score against.

While Timmins scored just five points, he cleaned the glass and his inside presence made it difficult for the Bulls to get clean looks at the hoop.

Withers has shown his ability both off the catch-and-shoot and at the hoop.

But he was as effective in his first game, when he scored just three points in a win over the Wellington Saints.

"In that game where Todd had three points, he had 13 or 14 rebounds," Matehaere said.

"There’s so many ways you can impact a game and these guys understand that. They’re making sure they are doing that game in and game out.

‘Tahjere [McCall] might not be lighting up the scoresheet, but his presence on defence is certainly being felt by other teams. There’s so many ways these guys can impact and they’re doing that.

"It’s great for us and it’s a great learning opportunity for the other guys as well."

Depth would be key as the season progressed too.

Tall Blacks and international 3x3 campaigns, notably the Commonwealth Games, fall in the middle of the season.

Timmins and McCullough are both possibilities to make those teams.

The Nuggets have another road trip this weekend, facing a quality Southland Sharks team in Invercargill on Friday, before heading to New Plymouth to play the Taranaki Airs on Sunday.