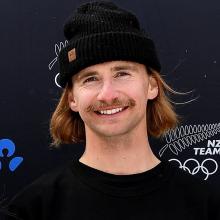 Finn Bilous
Wānaka freeskier Finn Bilous finished 12th in freeski slopestyle at the California round of the world cup yesterday.

Bilous (22) completed an excellent stop for the New Zealand team with a solid performance at Mammoth Mountain.

"The level of riding today was super high," he said.

‘‘I think with the Olympics coming up in a month, everyone has been riding a lot and working on new tricks and that was showing in their riding today.

‘‘I was really happy to make it through the qualifying round after a lot of changes to the programme this week due to weather.”

Bilous put down a solid first run in the finals with a technical rail section, including a back six off the rainbow rail.

He landed a double 1260 on the first jump and linked it into a switch triple 1260 on the final jump. He was rewarded with a score of 78.50, which left him sitting in fourth position after run one was complete.

Heading into run two, he knew he needed to step it up to get into a podium position, but he was not able to execute a clean landing on the final jump.

"My first run had a couple of bobbles, so not quite what I was looking for," Bilous said.

‘‘Going into the second run, I just really wanted to land everything clean. On the last jump, I just didn’t quite have the speed to do the switch triple rodeo 1440 so I opted for the 1260 and just squeaked it around."

His first run score remained his top score, putting him in 12th after all the remaining athletes had completed their runs.