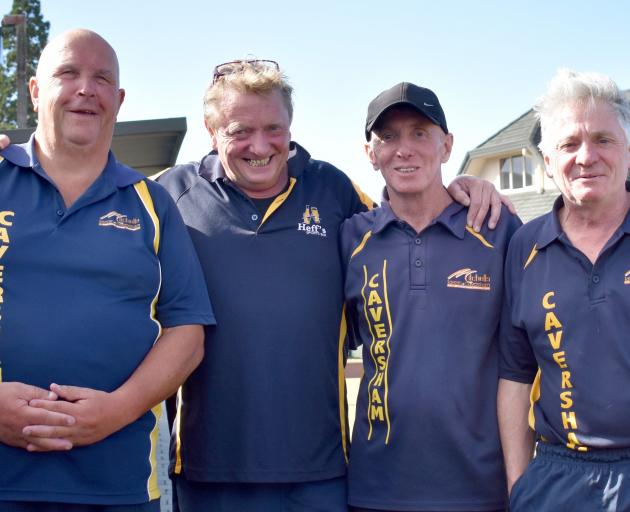 The Clark brothers have the rare distinction of being three brothers to play in a national final tournament, as yesterday’s victory secured Caversham the right to compete in the national champion of champion fours in Pukekohe, in mid-June.

After dominating earlier rounds, the Caversham quartet was drawn to play tournament favourite Forbury Park in the semifinal, which it defeated 20-17. It then had to meet another tournament team at short odds in Fairfield in the final, on its home green.

Despite dropping two shots on the first end to Fairfield, the Caversham four got on a roll, scoring 13 shots over five ends to hold a handy 15-5 lead at the midway stage of the 18-end encounter.

The Fairfield four of John Latimer, David Natta, Bruce Robertson and Roger Baron kept it close, scoring singles on the following three ends, but a two on the 13th end and a single on the 14th maintained a handy 18-8 lead for Caversham, with four ends remaining.

Fairfield fought back with three shots on the 15th end and a massive six shots on the penultimate 17th end to come within one shot and a sniff of victory, as Caversham’s lead was reduced to 19-18.

But come the hour, come Peter Culling playing lead for the Caversham quartet, as he covered the front of the jack with two shot bowls, to settle the nerves of the Clark trio.

Others tried to nudge it away but Steve Clark placed his bowl deep alongside the jack. Latimer then went wide with his second bowl to hand Caversham two shots and victory.

A large contingent of Caversham supporters was present to watch the club make history and Steve Clark was not short of praise for the effort.

"We played really well all tournament," he said of riding luck from time to time.

"Every time someone had a bad end, somebody else popped up and put us back in the game.

"I thought we were [finished] when we dropped that six."

For all four Caversham players, the win was the first Dunedin Centre title, and for the first time in a long time a team from Caversham will represent the Dunedin region in a national finals tournament.