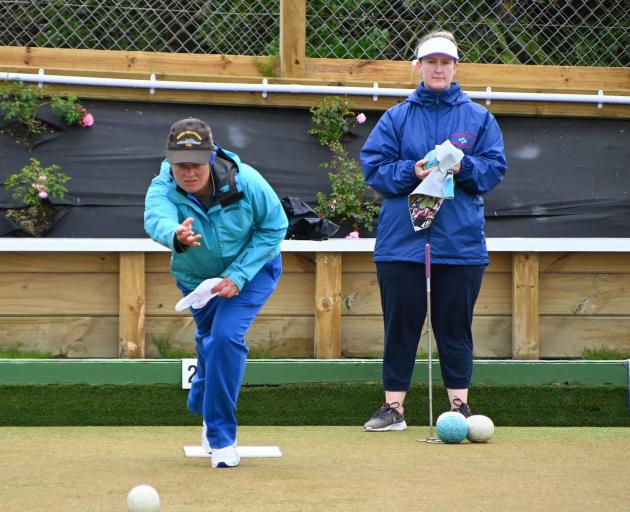 It had been a wait of almost a month for the Andersons Bay pair to discover their final opponents after they qualified soon after the weather-interrupted post-section play last month.

Work and travel opportunities limited playing opportunities for the North East Valley pair of Sarah Scott and Bronwyn Stevens, who eked out a 19-18 semifinal victory over the Outram pairing of Janet Swallow and Christine Boorer on Friday evening.

While both Eathorne and King have featured high in the Dunedin Centre rankings in recent seasons, neither had won a title until Saturday.

In addition to winning their first, they did it in style, defeating tournament favourites Sarah Scott and Bronwyn Stevens, of Northeast Valley, in a pressure-cooker match that went to an extra end after the scores were locked at 14-14 after the mandatory 18 ends.

The Andersons Bay pair, despite winning only six ends, played a superb game by not yielding to the reputations and unbeaten run of their opponent.

They applied pressure and weight on the head and restricted Scott and Stevens to a series of one-shot scores.

Only once were the North East Valley pair able to score more than one when nailing home a three on the sixth end in response to Eathorne and King’s four on the fifth.

From then on, all Scott and Stevens could accumulate were single shots. Eathorne played a blinder in countering the firepower if Scott, her opponent at skip. King was equally as effective in setting the head up as lead.

Despite the slow scoring rate, Scott and Stevens appeared in control at the end of the 12th end when they held a five-shot advantage at 11-6.

But from then on the tables appeared to begin to turn as the Andersons Bay pair took two shots on the 13th end to come within three.

Over the next two ends, Scott and Stevens hit back, but were still restricted to single shots.

With three ends to play, Eathorne and King found another gear.

They won the 16th end with a single shot and nailed home a five on the penultimate 17th end to take the lead for just the second time in the match.

In a tense action-packed final end, Stevens drew two shots, but Eathorne proved to be the equal of Scott, drawing shots with her first two bowls that held the match in the balance for the Andersons Bay pair, only for Scott to then nudge her bowl through to secure the shot and force an extra end with the game locked at 14-14.

King’s first bowl of the sudden-death extra end was right on the money as it came to rest on top of the jack. She played for cover in behind with her second and third, as did Stevens with her three. The battle of the two skips then decided the title.

Scott opened up the head with her first bowl and it was game on, Eathorne drawing the shot with her third and final bowl to secure a 15-14 victory and a first centre title for the Andersons Bay pair.

“We just hung in there until that end near the end where we picked up a big number. I guess that was the turning point for us and things went our way,” Eathorne said.

“There was not much in it. It was quite a tight tussle and it was just a couple of big ends that tipped it in our favour.”