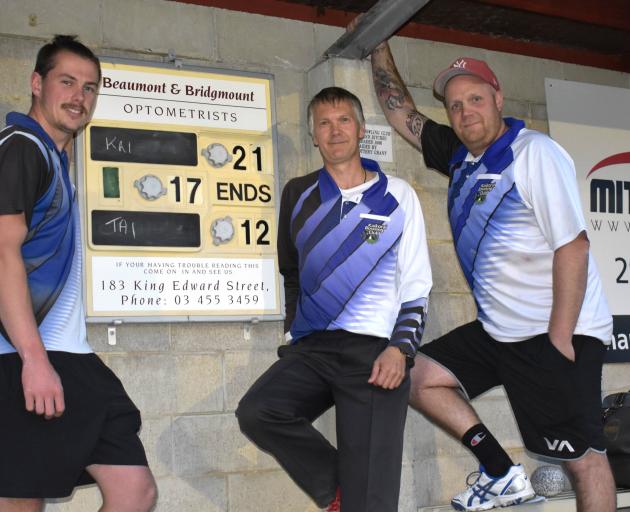 For Birkbeck and Horwell, having home-ground advantage counted for little, as two weeks ago they had fallen victim to Keanu Darby and Roger Stevens (North East Valley) in the champion of champions pairs on the same green.

On Thursday, the Taieri combination of John Killen, Craig Forgie and Jim Finnerty appeared early on ready to keep Birkbeck winless on his home turf.

The Killen-skipped Taieri trio applied pressure right from the first bowl, but it was Kaikorai skip Birkbeck who drew first blood on the first of 18 ends, when he trailed the jack towards two back bowls to open the scoring with two shots.

However, an ever-persistent Killen played some master deliveries to complement those of Forgie and Finnerty, a bag of four on the fourth end putting his team out to a 7-3 lead after five ends.

Despite consistent pressure from the Taieri combination, Birkbeck's trio remained in the hunt, keeping the game close, and the scores were locked up at 9-9 at the midway stage.

The two teams then went shot-for-shot until the number 12 proved Taieri's downfall.

After 12 ends, and with the score at 12-12, the green began to slow dramatically as the lights began to take affect and the evening air cooled.

Kaikorai handled the rapidly changing conditions better, scoring singles on the next two ends and bagging a four on the 15th end to set a path to victory.

A single on the 16th and a two on the 17th end pushed the score out to 21-12 in favour of the Kaikorai trio, brining about an early conclusion to a tactical tight encounter between two worthy finalists.

"We struggled at the start, just trying to get the line and length correct," Birkbeck said of the pressure Taieri put on his team.

The memory of losing the pairs final on the same green two weeks ago gave him an inspirational lift.

"We came together in the last third of the match and that was the difference in the game," he said, of opting to switch to longer ends.

Birkbeck said that he noticed that over the last five ends the green was a good yard or so slower, but offered more bite

"I'm just happy for Kelvin and Jonty. After Jonty and I lost the pairs a couple of weeks ago, it would have been super disappointing. To get this makes the season, really."

It was Birkbeck’s 12th centre title, while it was Buchanan’s first and Horwell's fourth.

Killen said it was just the way the game went.

"A couple of missed shots and that's bowls. You've got to take your chances when you get them."