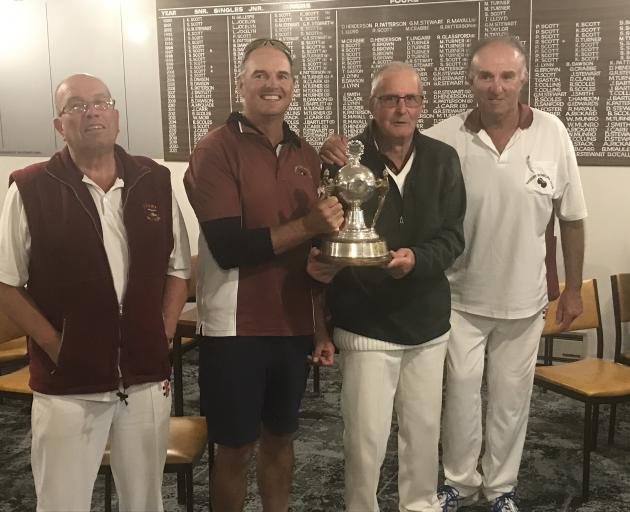 The champion Naseby four of (from left) Mike Buswell, Phil Dowling , Merv Jamieson and Gerard Geoffrey. PHOTO: SUPPLIED
This is the story of the little bowls club that could. Otago Daily Times correspondent Bob Howitt reports on how four Naseby men created history.

The Naseby lawn bowls club has been in existence for 111 years, and those are about the odds that were on offer when it contested the Central Otago champion of champions men’s fours at Bannockburn last Sunday — 111 to one.

Because in those 111 years the male members of the Naseby club had never won a centre title.

All that changed on Sunday when Gerard Geoffrey (a farmer), Phil Dowling (a farmer), Merv Jamieson (a retired farmer) and Mike "Buzzy’’ Buswell (a retired painter) went on a giant-killing spree of monumental proportions.

In succession, they knocked over RSA, Alexandra, Wanaka and finally Arrowtown, in a final that did not finish until 7.10pm under floodlights, each contest occupying at least two hours.

When the quartet set out at 6.30am on Sunday from Naseby, New Zealand’s smallest borough with a population of about 100 and a catchphrase of "2000ft above worry level’’, there was an element of optimism among them.

Although the Naseby club claims only 12 active male members (and eight women), they had won the Central Otago sub-centre interclub title from Ranfurly, Middlemarch, Patearoa and Waipiata and claimed a few tournament victories.

Naseby is more renowned for its curling rink than its bowling green, and indeed both Jamieson and Dowling have represented New Zealand at the winter sport.

It was Dowling, at 54 the youngest of the quartet, who commented that he had “a good feeling” about the day while Buswell, in his 80s, declared that he was contemplating retirement and what better way to go out than on a winning note.

Skip Geoffrey said that by the time they arrived at Bannockburn for an 8.30am start, having driven most of the way in thick fog, they were “highly motivated”.

That motivation brought them a solid victory over RSA, which then set them up for a clash with the "dream team’’ from Alexandra: Trevor Drake, Bill Clements, Brian Luff and Lindsay Thomas.

Drake, Clements and Thomas, who collectively claim more than 100 centre titles (80 of them to Clements alone), and who the day before had won the champion of champions triples title, were raging hot favourites to win.

Alexandra quickly established a 6-1 advantage and appeared to be cruising to victory.

But the Naseby four would not lie down. They began to frustrate the Alexandra four by continually moving the jack around and pretty soon were back on level terms at 6-6.

Finding himself continually down when he went to the mat, Drake resorted to driving. He killed one end, but at 10-11 on the final end, he missed twice, and to everyone’s astonishment, Naseby claimed the victory 12-10.

“Suddenly the impossible dream was becoming a reality,” Geoffrey said.

But the challenge did not get any easier because Naseby’s opponent in the semifinal was Wanaka, skipped by Richie Muir, who, the weekend before, had won the singles title, and with a grand old campaigner in Tom Malcolm leading.

Before Wanaka knew what was happening, it was down 11-1. The Naseby players again frustrated their opponents by moving the jack around with No 3 Dowling in awesome touch.

The outsiders held on to win 15-5, and just one opponent stood between them and a famous breakthrough victory: Arrowtown, which had eliminated the other Maniototo team, Ranfurly, in the semifinals.

“We kept thinking the bubble would burst,’’ Geoffrey said.

"But by the time we reached the final, we were confident we could keep going. There was a lot of texting back to Naseby while we waited for the final to start.”

The final did not start until 5.15pm and, as daylight saving had ended, Naseby and Arrowtown were not far into their final before the light began to seriously fade.

Fortunately, Bannockburn has floodlights, which helped a little, although the final couple of ends were played in near-darkness.

But by then the Naseby four had taken control of proceedings.

Although Arrowtown lead Trevor Tomlins held shot on 10 of the 13 ends played, Naseby’s incredible capacity to manoeuvre the jack to its favour helped it take control, winning 19-5.

The Ranfurly players stayed behind after their semifinal loss to cheer Naseby on, and after Geoffrey’s men were presented with the trophy, the two carloads drove the 90 minutes back to the Wedderburn pub, where celebrations continued late into the night.

Geoffrey had been overcome when he received the trophy from Central Otago president Stu Hurley.

“I’m not normally an emotional person,” he said.

"But I was completely choked up at that moment. I had such a sense of pride because we had never won a centre title before.

The day before the Naseby men created history, the women’s team of Angela Wilson, Carol Clark and Gaynor Rutherford made it to the final of the triples at Omakau, losing to Queenstown, which went on to complete a clean sweep of the titles, winning the singles, pairs, triples and fours.