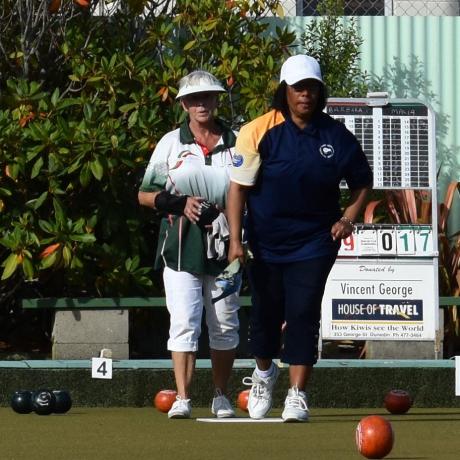 A Commonwealth Games representative for Tonga on the Gold Coast three years ago, and 2018 Dunedin Centre bowler of the year, Tavite ended her lean run in local competition with a 21-15 victory over Barbara Walker (Fairfield). It was her 10th centre title and earned a bar for her gold star.

After drawing shot after shot in an impressive display of bowls throughout the competition, it appeared as if the title was Tavite's for the taking.

But in Walker she found reaching the final was the easy part, playing it was something else.

However, Walker hit back and held a one-shot advantage after eight ends.

Walker held four scoring shots on the 11th end but Tavite sent down a heartbreaker to take the end and lock the game up at 9-9.

This shot ushered in a series of brilliant scoring shots from Tavite and a run of numbers on the board. She jumped out to a commanding 19-9 lead in the race to 21.

Not rattled by Tavite being two shots from victory, Walker closed the score to 19-15 over the next four ends, before Tavite scored a double on the 21st end to claim her first title in three years.

"It was so hard out there," Tavite said at the finish.

She read the green right, but it was the weight she struggled with at times.

"You could say I was lucky enough to get it right, as Barbara played really well."

The final of the men's champion of champion singles between Brent McEwan (St Clair) and Graeme Cocks (Andersons Bay) will be held at St Kilda Bowling Club at 5pm today.

The final of the men's open triples postponed last Wednesday because of rain will now be played at Taieri Bowling Club at 5.30pm tomorrow.