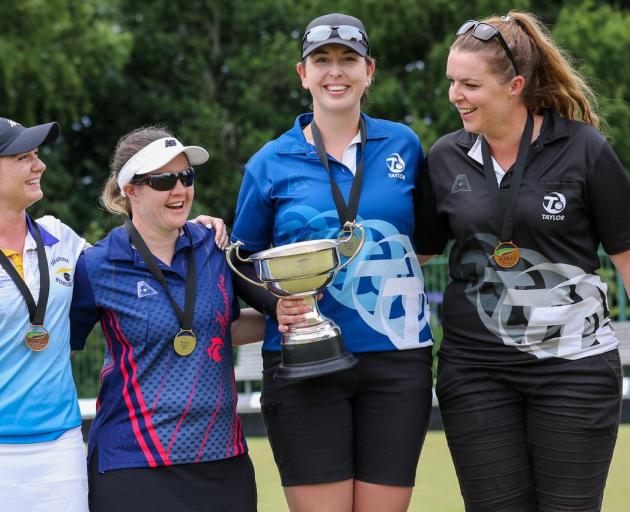 New Zealand bowlers (from left) Selina Goddard, Clare Hendra, women’s singles champion Tayla Bruce and Mandy Boyd celebrate their efforts at the national championships in Christchurch at the weekend. PHOTO: BOWLS NZ
Tayla Bruce made the most of familiar greens to storm to victory in the premier women’s singles at the national championships at the weekend.

Bruce (26), a member of the Burnside club, claimed her first national singles title with a 21-14 win over pairs partner Clare Hendra in the final in Christchurch.

It was a sweet moment for the Black Jack, who had been a regular in the final eight since her late teens, and twice a beaten finalist, but never managed to get her name on the trophy until now.

Bruce had to win the title the hard way, too.

She took a 10-6 lead in the final but appeared to crumble as Hendra showed all her tenacity to claw back the momentum and score seven unanswered points to lead 13-10.

Bruce regrouped, pushed to an 18-14 lead, and closed out victory with a two and a single.

She had also had to hold her nerve earlier in the semifinals, when she weathered a spirited comeback from 2017 champion Selina Goddard to win 21-19.

Hendra had beaten Mandy Boyd 21-12 in the other semifinal.

The other event decided at the weekend was the men’s pairs.

It denied the controversial Lawson a 15th New Zealand title.

Lawson and Grantham, who had been in fine form all week, held an 11-9 advantage after 13 ends.

Kelly and Curtin put on a commanding display in the last few ends, and the Lawson composite pair needed six shots to force an extra end.

Two last-gasp, full-blooded drives from Lawson whistled past, Kelly picking up a two and moving within one title of his Gold Star.

In the semifinals, Kelly and Curtin had been pushed all the way by Taylor Horn and Jesse Russell (Central Cambridge) before sealing a 16-15 win.

Lawson and Grantham had a 20-10 win over the composite pair of singles champion Kelvin Scott and Barry Williams.

The week finished with Canterbury bowlers scooping up all four titles.

The New Zealand fours and mixed pairs tournaments are held in Taranaki from February 24 to March 3.

Many of the bowlers in action on Sunday will first compete in the annual Burnside pairs tournament this weekend, chasing a share of the $12,000 purse.