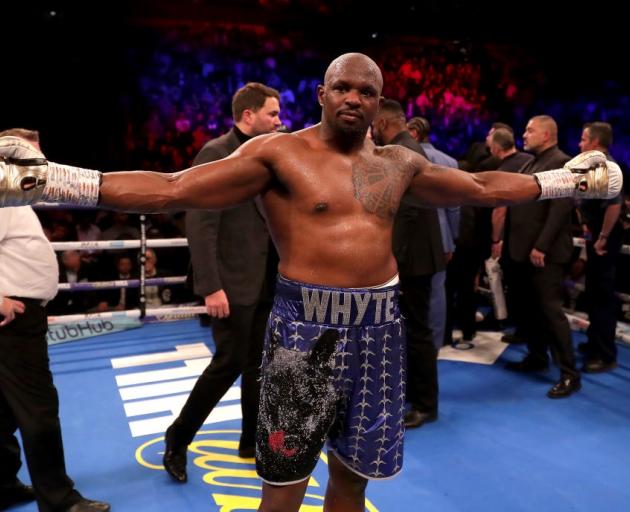 The news has left the heavyweight division in disarray,

On the same day American heavyweight star Deontay Wilder accepted Whyte as the next challenger to his WBC heavyweight crown, the London slugger's career was cast into doubt.

According to reports, Whyte's A-sample tested positive for at least one banned substance when tested by UK Anti-Doping (UKAD) just days before his interim title fight unanimous decision win over Oscar Rivas at London's O2 Arena on Sunday morning (AEST).

The win over Rivas made Whyte the mandatory challenger to Wilder's WBC belt in a fight tentatively booked for the end of 2019.

Those plans and the short-term future of the heavyweight division are now completely up in the air.

According to boxingscene.com, Whyte's team was told of the positive test just days before his fight with Rivas — but officials from the British Boxing Board of Control allowed the fight to progress, despite Whyte previously being banned for two years after testing positive for banned substance Methylhexaneamine in 2012.

The 31-year-old is yet to notify UKAD if he intends to contest the results of the A-sample and his B-sample is yet to be analysed.

In a further complication to the already murky division, the WBC was reportedly not even notified of the positive test in the lead-up to the fight, meaning it was not given an opportunity to step in and withdraw their sanctioning of the fight.

The test came after Whyte weighed in at 259 pounds for his fight against Rivas — the heaviest he has weight in at.

After securing the mandatory challenge against Wilder, Whyte's career was at its highest point.

It could now be all over.

Whyte recovered from a ninth round knockdown to overcome Rivas across 12 gruelling rounds.

The mandatory fight with Wilder had to be booked in before May 2020 even though Wilder was expected to fight Tyson Fury or Luis Ortiz before — it's now up in smoke.

Outgunning the previously unbeaten Rivas was Whyte's 10th win in a row and provided him with his most important step towards a world title.

His future had never looked brighter.

"I don't like easy fights," Whyte told Sky Sports after the Rivas win, despite knowing he had tested positive to a banned substance already.

"I don't like easy fights because easy fights are dangerous, because sometimes you can underestimate the people you are fighting and think 'ah it's a walk in the park' and I don't like doing that.

"I like hard fights. Fights where they get you edgy and you think let me do extra on my run or push a little harder. So I like these hard fights, let me do that extra round of sparring, let me leave no stone unturned.

"But I've done the work, I've won the fights, I've paid the sanctioning fees, I've won every single WBC belt that I'm eligible for, so we'll see what happens."

It comes just one day after Wilder spiced up his expected showdown with Whyte be declaring he was going to "knock him out silly".

"He had four opportunities to fight, what do you mean? What took you so long?

"They wanna have this uproar about him not getting his opportunity when he had opportunities.

"It's just to build up the fight, it's pathetic and it's stupid."

It's a fight that seems unlikely to ever eventuate.