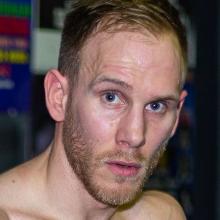 Richie Hadlow
Queenstown boxer Richie Hadlow returns to the ring this weekend for his pro debut - five months after it was cancelled on medical grounds.

Hadlow was due to fight on Joseph Parker's undercard in December, but failed the mandatory pre-fight brain scan.

But the Commonwealth Games representative has now been cleared to box on, and faces Ricky Curline in Christchurch tomorrow.

Hadlow is raring to go.

"I always say boxing's like an emotional roller coaster," he said.

"Sometimes you're super confident, sometimes you wonder `why am I doing this?"

"I need to just lace the gloves up and start punching."

"I wanted to make smart decisions, and not be putting my health at risk."

He learned it was safe for him to compete again at the end of February.

"It was great to hear, but it's such a bittersweet thing. As a fighter you know how you feel, and I was ready to go in December. I'd trained really hard, I was ready, but I had to put everything on hold."

He says he never had physical symptoms.

"I wasn't going through a physical struggle, I just had a scan and some medical stuff put in front of me."

As for the future, he's happy to see what happens, and is also keen for a fight in Queenstown.