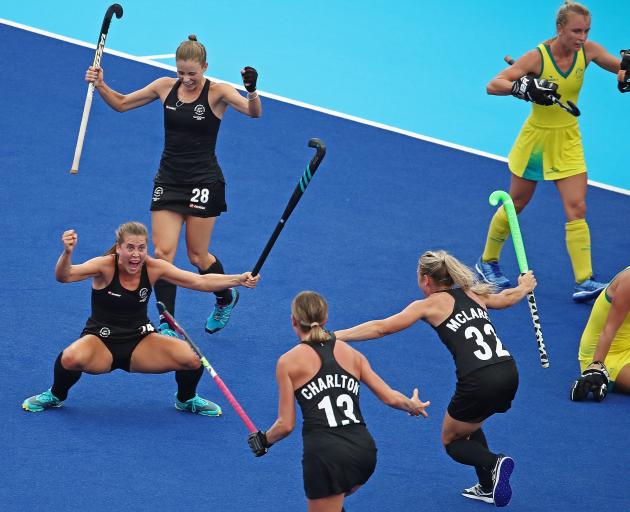 Rose Keddell of New Zealand is congratulated by her teammates after scoring their second goal during the Women's Gold Medal match between Australia and New Zealand. Photo: Getty Images
The Black Sticks women have created New Zealand hockey history on the Gold Coast with a 4-1 defeat of Australia to win gold for the first time in six Commonwealth Games attempts.

Euphoria overflowed from the dug-out as the team spilled onto the pitch in a moment of unshackled triumph with the parp of the final hooter.

The Kiwis were imbued with a confidence which stunned the Australians into submission in front of a roaring bipartisan crowd that included Prime Minister Jacinda Ardern.

Late in the third quarter Split Enz' History Never Repeats boomed over the public address system. That proved a prophetic anthem. Australia, a team which had won the title on four of the five previous occasions, were on their way to defeat.

The goal-scorers seized their moment on the big stage.

After a scoreless first quarter, Shiloh Gloyn smashed a field goal with space out front three minutes before halftime. Australian goal keeper Rachael Lynch had no answer as the ball cannoned into the right of the net.

The Black Sticks followed up with penalty corners in the 34th, 42nd and 56th minutes to Rose Keddell, Olivia Merry and Anita McLaren as they put the match result in a vice.

The work of goalkeeper Sally Rutherford and her defence force deserved just as much glory.

The penalty-takers Stacey Michelsen and Samantha Harrison, and the defence of Grace O'Hanlon must also be lauded for dragging them into the final with the defeat of England.

Breaking the jinx of eight failed shootouts saw them vault into an age of enlightenment regarding their own abilities.

The sport debuted at Kuala Lumpur in 1998, and New Zealand have endured some close moments. The 4-2 penalty strokes loss in Delhi after a 2-2 draw to Australia in the final was probably the most devastating, something that current team members Michelsen, McLaren, Ella Gunson and Harrison will no doubt remember.

Entering the tournament, the women had a record which included silver at Delhi in 2010 and bronze at Kuala Lumpur in 1998 and Glasgow in 2014.

Coach Mark Hager sought a complete set of gold, silver and bronze medals since his tenure began in January 2009.

"I'm pretty sure we'll go okay if we get our defence right," he said.

Those words echoed in the final.

"The last few tournaments we've leaked a few too many goals and haven't put on enough scoreboard pressure. We also want to improve our penalty corner and goal scoring conversion rates."

The team were as good as his words.