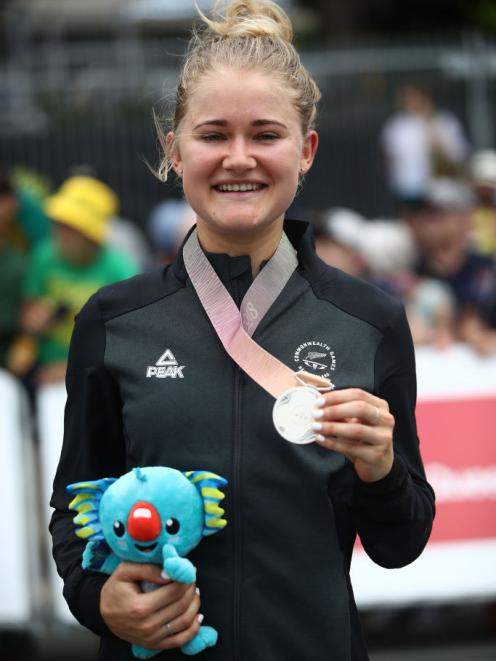 Williams has claimed silver on the 112.2 kilometre course on the Gold Coast, riding strongly to finish comfortably in second, behind Australian sprinter Chloe Hosking.

Williams' medal was the first by a New Zealander in the road race since Susy Pryde claimed silver in Kuala Lumpur in 1998, and she was delighted to break the drought.

"It's amazing - not what I was expecting but so happy to do it for New Zealand and my teammates."

Hosking was too quick in the final sprint, kicking away from the remaining riders to claim a gold which was well set up by her dominant Australian teammates.

However, because Australia put all their eggs in Hosking's basket, it left the podium spots open, with Williams - one of the biggest threats to Australia all day - pacing herself excellently to claim second, and continue a superb 2018 which has already seen her win the national road race and time trial titles.

"Hopefully some more results in Europe would be cool, but I'm so happy so far."

It was nearly double delight for New Zealand, with Sharlotte Lucas being agonisingly pipped for bronze by Wales' Danielle Rowe, just running out of gas and claiming an extremely credible, but surely frustrating, fourth.

Lucas would normally be New Zealand's designated sprinter, but she had to fight back with the help of Linda Villumsen after being dropped on one of the finishing climbs, and was just off the wheel as the remaining few riders went into the finishing sprint.

As a result, Williams said she knew it was up to her to go for glory.

"I thought my best hope for a medal was to attack on the last climb and try get away solo, because I'm not normally known as a sprinter. Coming into the finish, I was going to sprint for Sharlotte, but she was struggling a bit and just got caught out on the last climb there.

"I was on Chloe's wheel, I turned around with 200 metres to go and she wasn't quite there, so I tried to finish it off."

While Hosking was too quick, Williams had more in her legs than her fading rivals, sprinting home to take a superb silver.

Villumsen finished 12th, 25 seconds back, while Kate McIlroy (19th) and Rushlee Buchanan (26th) also played their part in setting up Williams' medal, which had been 20 years in the making.