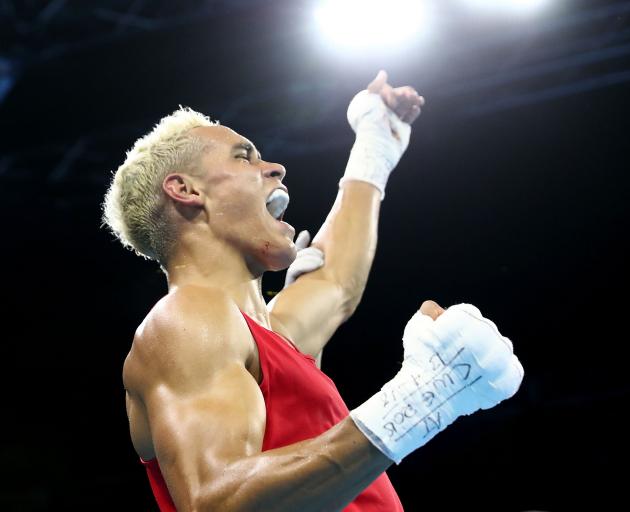 Today he not only achieved that phenomenal feat but is now the first New Zealander to clinch gold in two weight divisions. History is his.

It comes within hours of the women's Black Sticks claiming another historic feat by beating Australia in the gold medal match to claim their first Commenwealth Games title.

Two Games golds at 22-years-old, Nyika is just getting started; this result confirming his status as one of New Zealand's premier athletes.

That his double delight comes in a sport so often overlooked for funding and recognition only magnifies his passion, dedication and sacrifice.

Fighting local favourite Jason Whateley, Nyika was at his technical best with a clinical performance. He was far too quick for Whateley, slipping, moving and countering his way to a unanimous victory.

A huge presence of extended family belted out Tutira Mai Nga Iwi outside and the venue, urging on each Nyika shot. And they erupted when the verdict was delivered.

Boxers at these Gold Coast Games traded blows inside studios used to shoot movie blockbusters such as Pirates of the Caribbean. Johnny Depp Nyika is not, but he played the lead role here to perfection.

Unlike other Kiwi prospects expected to canter to gold, he handled the pressure with aplomb.

Nyika dyed his hair blond prior to the Games and adopted the nickname "pint of Guinness" for its apparent long, dark, strong properties.
Today he walked the talk.

Due to its brutality boxing may not sit well with everyone but, if nothing else, you must appreciate the skill, fitness and intelligence required to hit and not be hit. For Nyika, this is his art. And this was a masterpiece.

Getting to this point has not been easy, either. Nyika endured difficult build up to the Games after a messy split from long-time coach Rick Ellis, with whom he welcomed guidance from the age of 14. That evolved to the point he was reduced to training in a Hamilton car park.

Refusing to compromise his dream, Nyika used that adversity to fuel his desire, traveling to the States and the UK to ensure elite training.

Overcoming that tumultuous ride, joy was evident as Nyika embraced his family.

Troy Garton also collective bronze after tearing her ACL before the Games, and Patrick Mailata lost in his epic super heavyweight semifinal by split decision.

Today, though, belongs to Nyika.