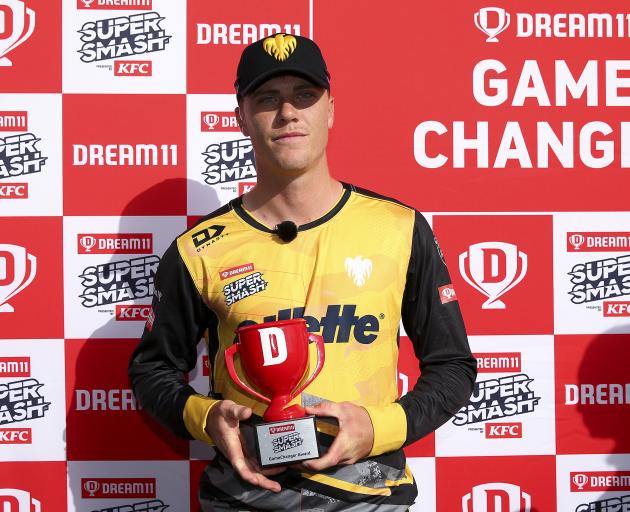 Wellington batsman Finn Allen with a man-of-the-match award. Photo: Getty Images
Finn Allen — mark that name down as one to watch.

Otago’s bowling attack did plenty of watching of Allen yesterday, and they saw him smacking the ball to all corners of the University of Otago Oval as Wellington cruised to a comfortable victory over Otago in a Super Smash game.

The Wellington opener smacked Michael Rae out of the ground. He swatted the ball straight over cover for six. He stood and delivered in the classic baseball style at times as no Otago bowler was spared.

Even Mitch McClenaghan, who bowled well for Otago, was in the firing line as the left armer went for 18 runs in his final over.

Allen has been impressing in the Super Smash so far and is a big reason the Firebirds side is unbeaten. It was his third consecutive T20 50, and second unbeaten knock in the 90s in the space of three games.

In the end he finished on an unbeaten 92, making more than half his side’s runs as it easily chased down the target set by Otago. It reached the required 168, with five wickets down, halfway through the 17th over.

It could have been different — Allen survived a confident lbw shout by McClenaghan from the very first ball of the innings.

It was a decent shout but umpire Chris Brown turned it down and from there Allen took off. That’s cricket. Some days those decisions go your way and other times they don’t.

Allen took 27 runs off one Rae over — throw in a wide and Rae was in the dog box after seven balls and Wellington had brought up 50 within three overs.

Allen hit eight sixes and five fours and scored his 92 off just 43 balls. But he actually slowed down having brought up his 50 off just 20 balls.

He did not have a lot of support down the other end,

but Wellington skipper Michael Bracewell hung around for long enough to combine for a 50-run partnership with Allen, and also played some nice shots.

The home side was probably 15-20 runs short and lost too many wickets at the start of the game in front of a decent crowd. The team was 71 for four after 10 overs and in the end did well to get up to 167.

Neil Broom and Anaru Kitchen came together and compiled a 69 run partnership. Kitchen struck the ball well and managed five sixes in his knock. Two of the sixes were reverse sweeps, which was impressive.

It was not a disgrace for Otago to lose to Wellington, the defending champion, which now has five wins from as many games.

Otago bowled both sides of the wicket too often and anything loose was gobbled up by Allen. It seems hard to believe Allen was part of the Auckland set-up but is now playing for the Firebirds while Auckland is down the bottom of the competition.

The home side does not have a lot of time to think about Allen and his bat. The team will fly north at the weekend and take on the Central Stags at the batsmen-friendly Pukekura Park in New Plymouth on Monday.

Too many wide and short balls and there will again be plenty of watching and not a lot of celebrating.