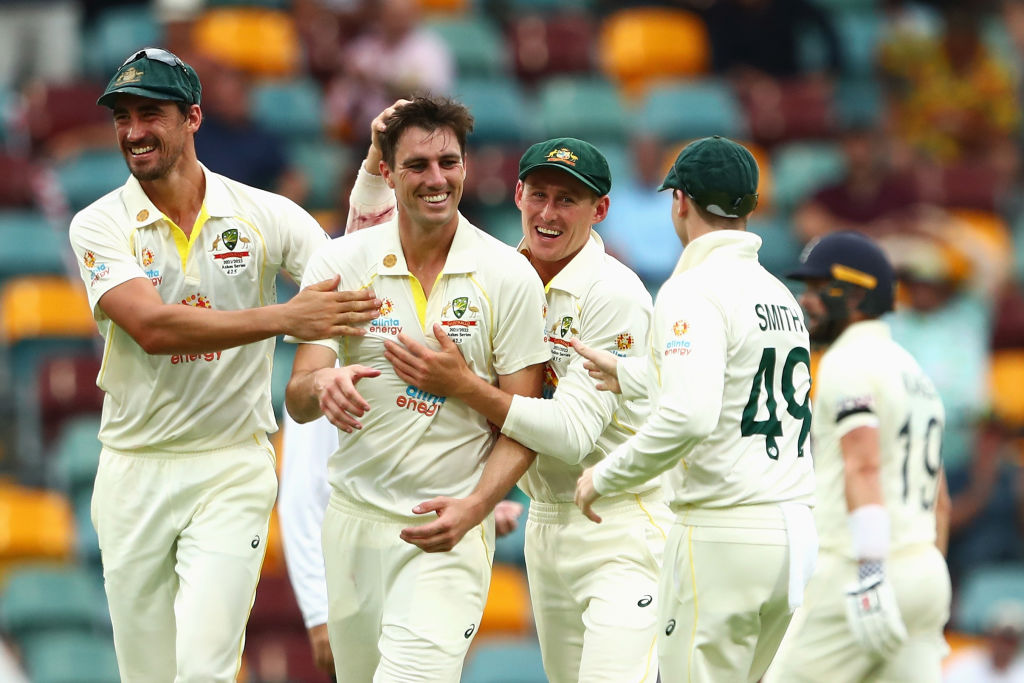 Australia's Pat Cummins celebrates with teammates after dismissing England's Chris Woakes. Photo: Getty
Pat Cummins took a five-wicket haul in a dream start to his Australia captaincy as England were skittled for 147 before tea on the opening day of the Ashes at the Gabba on Wednesday.

Cummins (5-38) led his team off the ground holding the Kookaburra ball aloft, enjoying a huge ovation from the Gabba crowd after his first five-wicket haul against the English.

His pace colleague Josh Hazlewood ran forward from the deep to take a terrific low catch to boost his tally with the final wicket of Chris Woakes (21), who was reduced to desperate slogging.

Hazlewood did the same favour for Cameron Green, catching a rash pull by Ollie Pope (35) to hand the seam-bowling all-rounder his first test wicket.

England made a disastrous start after Joe Root won the toss and elected to bat on a grassy pitch, with Rory Burns becoming the first player dismissed with the opening ball of an Ashes series in 85 years, bowled around his legs by a searing Mitchell Starc delivery.

Root went for a duck, caught behind by debutant wicketkeeper Alex Carey off the bowling of Hazlewood, as England slumped to 59 for four at lunch.

Cummins had opener Haseen Hameed caught in the slips for 25 just after the break before Jos Buttler (39) and Pope combined for a 52-run partnership.

Starc broke their stand with a sizzling delivery that caught Buttler's edge and sailed to Carey.

Cummins had Ollie Robinson caught behind to become England's third duck for the innings, and Mark Wood (8) caught in close.

Dawid Malan was earlier caught behind for six, needlessly pushing at a rising Hazlewood delivery, the edge giving Carey his first test dismissal.

England earlier sprung a surprise by confirming Stuart Broad would be rested along with fellow pace veteran James Anderson, the first time in five years that neither have bowled in a test.

That left a combined 1156 wickets on the bench and meant Wood and the inexperienced Robinson would lead the pace attack, with Jack Leach picked as a spinner.

Rain in Brisbane meant there was a delay to the start of the Australian innings.