Cricket can be a game of some complexity and nuance, but as England showed in their dismantling of Australia in Thursday's semi-final, it can also be a remarkably straightforward sport.

Put simply, if your frontline pace bowlers are bang on the money and your opening batsmen are absolutely on fire, you aren't going to lose many games in the one-day format.

Such simplicity is a little ironic given how much England have agonised over their World Cup record - they have not reached the final since 1992 and indeed had not won a knockout round match in the intervening 27 years.

In contrast, Australia have won four of the last five tournaments but there was no sign at all of those sharply contrasting pedigrees once play began at Edgbaston in Birmingham.

From the outset, England's pace attack of Chris Woakes and Jofra Archer delivered exactly what their captain Eoin Morgan would have wanted from them - removing skipper Aaron Finch, David Warner and Peter Handscomb to reduce the Australians to 14-3 inside 37 balls.

They were quick and accurate and extracted the maximum possible movement out of the morning surface and although Steve Smith and Alex Carey were able to rebuild, Australia never truly recovered from that opening blitz.

"Today was close to a perfect performance, right from the two bowlers up front," Morgan said.

"Chris Woakes and Jofra Archer bowled a hell of a spell. They put pressure on with early wickets and allowed us to stay on the front foot." 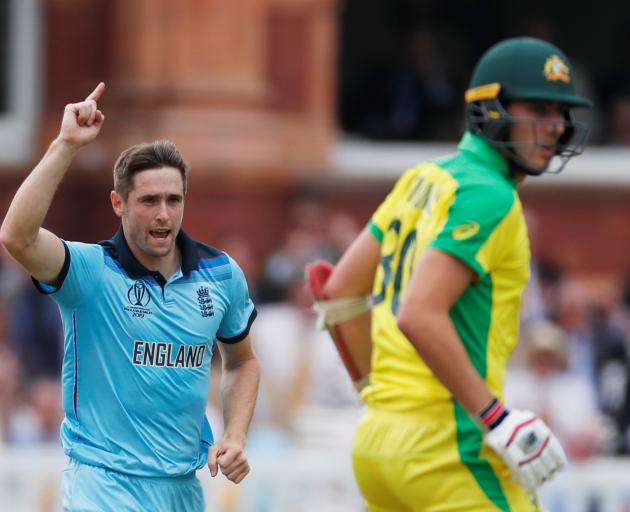 Then, chasing a lower than expected target of 224 to win, England's opening batsmen Jason Roy and Jonny Bairstow did exactly what was needed in such a situation - they batted aggressively but sensibly to reach 50 without loss at the 10-over mark.

By the time Australia broke through, with Bairstow trapped lbw by Mitchell Starc, England were over half-way to their target with nearly 32 overs remaining.

"The first three or four overs was very intelligent batting. They absorbed a bit of pressure, saw that swing was going to be a little bit of a threat and the way they waited until the bowlers came into their areas to hurt them was very smart," said Joe Root, who saw England through to victory with a brisk unbeaten 49 from 46 balls.

"Once we got off to a start we were able to put more pressure on them and then felt always ahead in the game."

Roy's sublime strokeplay for his 85 and Woakes's 3-20 were the two outstanding individual contributions but Adil Rashid's leg spin delivered three wickets, including the stubborn Carey to break a 103-run partnership with Steve Smith.

To a man, England delivered when it mattered and the transformation of this team, after the debacle of four years ago has been astonishing.

England didn't get out of the group in Australia and New Zealand - they won only two of their six games and were beaten by Bangladesh.

"It's been a process for the last four years. In 2015 we were way off the mark, we struggled against the top teams, and the teams that sat below that," said Morgan.

"So there was quite a drastic change in the way we played and the way we looked at playing our 50-over cricket."

Now comes the chance to be the first England team to win the World Cup and as the chants of "Cricket's coming home" rang out, there was little doubt the public believe Morgan's team can deliver.

Morgan, though, is keeping his feet on the ground, aware that New Zealand showed their quality with the impressive semi-final win over India at Old Trafford on Wednesday.

"I think New Zealand throughout the whole tournament has been probably the hardest side to beat and the best side in the group stages," said Morgan.

"I think their performance in the semi-final was probably their best. They will be a difficult side to beat on Sunday, so we are looking forward to it."

Jason Roy has avoided a potential ban for the final after protesting about his dismissal during Thursday's victory over Australia.

Roy, who had struck a magnificent 85 in 65 balls, was given out caught behind off Pat Cummins, although television replays showed the ball had not touched his bat or glove as he attempted a pull shot.

The England opener stood his ground and remonstrated with South African umpire Marais Erasmus. England had used their review appeals by that stage of the semi-final.

With Roy having gained one demerit point already in the tournament, he risked a one-match ban, for Sunday's final, if he was handed three points and reached the four-point limit.

But in a statement, the International Cricket Council said he had been given only two points and a fine of 30% of his match fee.

"Roy admitted the offence and accepted the sanction proposed by match referee Ranjan Madugalle and as such, there was no need for a formal hearing," the ICC said.