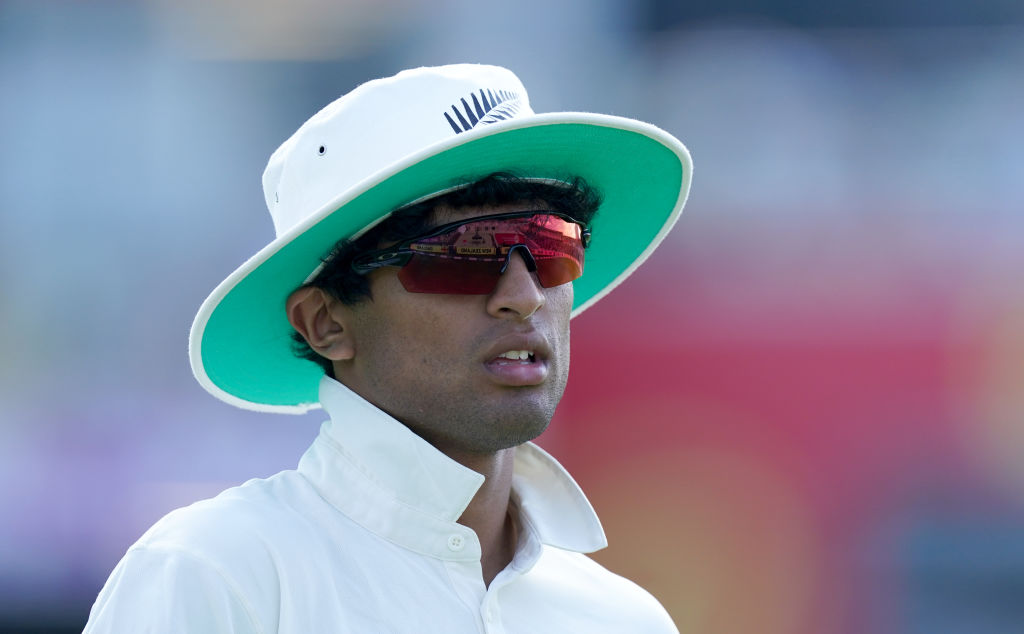 Rachin Ravindra played a prominent role as New Zealand drew with India. Photo: Getty
Under the cover of a dimly lit Kanpur sky, the Black Caps pulled off one of New Zealand cricket's greatest heists.

Tom Latham laid the plan, Will Somerville cased the scene, Rachin Ravindra stole the plaudits and Ajaz Patel was his getaway companion into the hazy night as the Black Caps stole a draw right from under the nose of the Indian fielders.

With just one wicket remaining on the final day of the first test, Ravindra completed a most memorable debut by steering the Black Caps to safety, with he and No 11 Patel batting for 29 minutes and blocking out 52 balls in a phenomenal rearguard to deny India, and save the Black Caps from defeat.

Never have New Zealand's spinners contributed so little with the ball but so much with the bat.

Over after over, Ravindra and Patel saw off the world's best spin bowlers, blocking, prodding and edging their way through another six balls, then anxiously waiting as umpire Nitin Menon checked the fading light via his light metre to rule if the test would end early due to bad light.

Over after over, Menon came back with unwanted news – the test continues. The sun even cruelly decided to pop back out from behind the clouds to extend the test further – only aiding to darken the Black Caps' chances.

Finally, with under 10 minutes left in the test, Patel strode forward and firmly blocked a ball back to bowler Ravindra Jadeja, Menon checked his instrument, and delivered news that made the Black Caps beam, and India sigh in exasperation.

The game was over, everyone shook hands, and we were …. right back where we began the series, at 0-0.

But don't let that static fool you. What had unfolded over five days was unforgettable.

Through four days of an enthralling first test, the Black Caps had matched India step for step in their best performance in India since 1988. This was an Indian team who had won 11 of their last 12 home tests, with a superlative record when winning the toss, and weren't supposed to draw - let alone be at risk of losing - to New Zealand, a team they had historically thrashed time and time again at home.

But, this is no average New Zealand side, and they endlessly fought - always finding a new entrance back into the mix just when it looked hope had been lost.

Hope had never looked more lost than in the final throes of day five.

A day that held aspirations of glory at lunch turned into a fight for survival by tea, and ended with a desperation to avoid the dejection of defeat, which would have left the Black Caps down 1-0 heading into Friday's second test in Mumbai.

It had all looked so promising two hours into the final day. Resuming at 4-1 with 280 further runs required for victory, Latham and nightwatchman Somerville batted unbroken through the first session, adding 75 runs.

However, after 110 balls of grind and 36 runs – what is it with New Zealand spinners and fourth-innings batting? - Somerville departed the first ball after lunch, hooking Umesh Yadav to long leg where Shubman Gill took a superb low catch.

Latham was joined by Kane Williamson and a careful 39-run stand was created, with the end goal in mind to take the game as deep as possible in search of an unlikely win.

But Latham's dismissal – he chopped on to Ravichandran Ashwin for a committed 52 off 146 balls - squashed that plan.

As the required run rate ticked above four an over, the Black Caps shut up shop, and soon the wickets started to tumble.

Ross Taylor taking 23 balls to get off the mark was an indicator of the change in intent, but the next delivery was his undoing, when he was bowled by Jadeja with the final ball before tea.

So, when the final session started with the Black Caps needing 159 runs at a required run rate of five an over, with just six wickets left, the decision to play conservatively was relatively simple, and made even more comprehensive when Henry Nicholls' poor test continued with a fourth-ball lbw dismissal.

Five overs later, the one fearsome threat the pitch posed – balls staying low – emerged to remove Williamson. After 112 balls of watchful defence, for an ultimately irrelevant 24 runs, Williamson was trapped lbw by the dreaded delivery that stayed low from Jadeja, who wheeled off in a celebration that showed he had no doubts what result would follow.

He had failed to account for a sensational New Zealand debutant.

When Williamson fell, Ravindra arrived at the crease – and never left.

The 22-year-old never looked flustered as men fell around him - Tom Blundell, dismissed by Ashwin after a 38-ball stay, Kyle Jamieson, lbw to Jadeja after 30 balls, and Tim Southee, the same departure after just eight deliveries.

That left Ravindra standing in the middle with Patel, needing to survive as long as possible in the fading Kanpur light.

For 91 balls, Ravindra had repelled the Indian attack. For 23 deliveries of his own, Patel did the same, and as the evening sky slowly turned to black, Menon provided the final verdict.

The day ended in darkness, but New Zealand cricket has never been brighter.