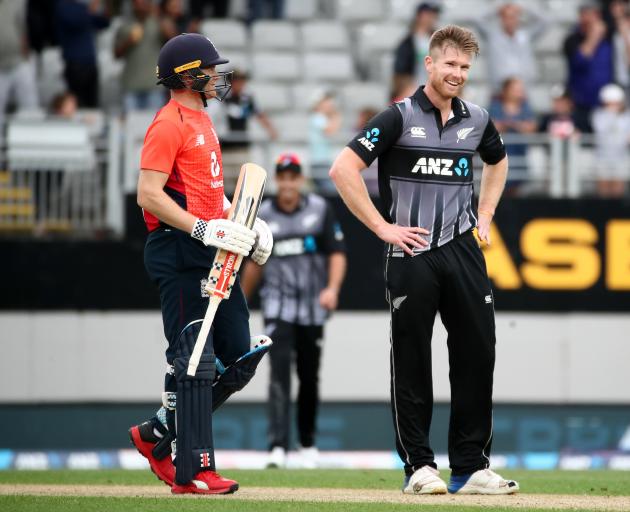 Jimmy Neesham sees the funny side as New Zealand and England are forced into a super over in the deciding T20 in Auckland. Photo: Getty Images
Stop me if you've heard this one before.

Playing in a winner-takes-all showdown, the Black Caps and England simply couldn't be separated at the end of their allocated overs. Jimmy Neesham was involved at the death, and Trent Boult couldn't save a six on the boundary rope in the dying stages. A Super Over was required to find a victor.

There, despite the best efforts of Martin Guptill and company, England came away with a thrilling triumph, and a trophy, while the Black Caps were left to rue what could have been.

No, this not July. This is not the World Cup final. We are not at Lord's.

It happened again. It really did.

The stakes were lower, the format shorter, and the boundaries closer, but the Black Caps and England have produced another tie – with England triumphing in the Super Over to take a 3-2 win in their Twenty20 series.

The World Cup final will surely never be topped for astonishment and absurdity, but the two teams produced a decent sequel, in a match reduced to 11 overs, then extended to 12 when the game went into re-runs.

Needing 13 to win from three balls, Chris Jordan smacked Neesham for a six, then a two, before swatting his final delivery away behind square leg for four to send the game to a Super Over, much to the amusement – and bemusement – of the players involved four months ago.

At least this time there were no overthrows, nor boundary countbacks, as Jonny Bairstow and Eoin Morgan smoked Tim Southee for 17 runs, and Tim Seifert, Guptill and Colin de Grandhomme could only muster eight from their six balls, as Jordan ended up the hero with both bat and ball.

Super Over specialists, England remain, and while this particular victory means little – England showed what they thought about the series' importance when they rested Dawid Malan despite him having just smashed a century in Napier – the cricket was certainly captivating.

Having decided to bowl first after winning the toss, England's plans were promptly delayed by heavy rain, and once it eased, they then had to deal with a flood of runs flowing from the Black Caps batsmen.

Guptill and Colin Munro were at their belligerent best, peppering the invitingly short Eden Park boundaries as they smoked an 83-run partnership from just 31 balls. 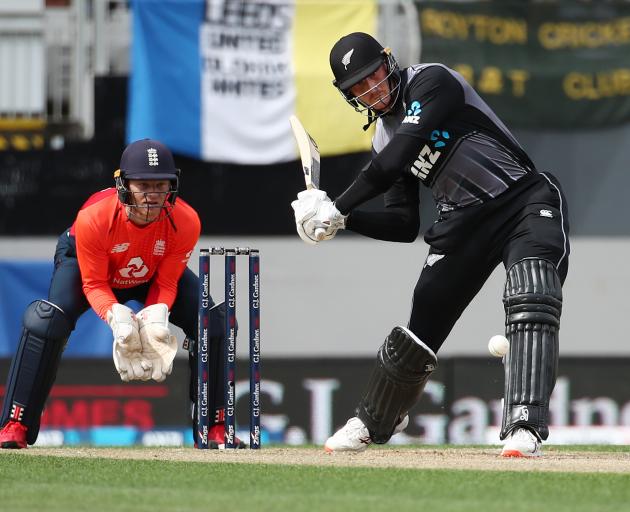 Martin Guptill clobbered a 20-ball-50 to get NZ off to a flying start. Photo: Getty Images
Guptill sent one Jordan delivery into the top tier of the stands as he blasted to 50 from 19 deliveries, and while he was out the following ball, Munro's 21-ball 46 ensured there would be no let-up for the England bowlers.

Such was the demolition that overs which went merely for single figures drew appreciation, and while England pegged the Black Caps back ever so slightly, Seifert produced an impeccable Brendon McCullum impersonation. Seifert's 39 from 16 balls featured a sensational scoop for six off Sam Curran, immediately followed by a flat-batted screamer over mid-wicket, with the wicketkeeper looking remarkably similar to his predecessor as the Black Caps set England a daunting 13.4 per over to claim a series victory.

Remarkably, they managed it, and arguably should have done so without requiring a flashback to Lord's.

Bairstow led the way with 47 from 18 balls, and some brief bluster by Morgan, who smacked Boult for 16 from three balls, and Sam Curran, who took 20 from four Scott Kuggeleijn deliveries, saw England shoot well ahead of the required run rate.

However, three wickets in four balls, including some canny bowling from Mitchell Santner, left the equation at 26 runs from 12 balls. A solid Tim Southee over reduced that to 16 from six – another reminder of that fateful day in London – but just as the Black Caps looked set for victory, Jordan struck with the bat, then the ball, to give England victory, and leave the Black Caps with the cruelest of defeats.