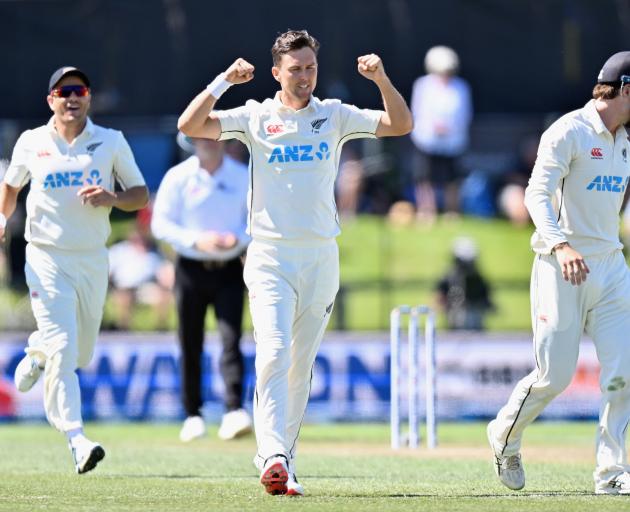 Latham's dazzling 252 set things up, and devastating spell of bowling saw Bangladesh routed for 126 on day two of the second test, miles in arrears of the Black Caps' 521-6 declared.

It was a day of milestones, as although Latham fell short of an elusive triple century, Boult reached 300 test wickets – just the fourth New Zealander and 36th worldwide to do so - while Devon Conway's third test century flew under the radar and Ross Taylor likely played his last test innings in the midst of Latham's mastery.

Latham's 373-ball knock featured 34 fours and two sixes, and by the time he finally wandered off to applause from his home ground, he had compiled the ninth-highest score in New Zealand test history.

The captain now owns two of the top 10, following his 264 not out against Sri Lanka in 2018, and he also took two catches in a day that was only blemished by an apology he surely must have offered to Conway.

After waiting over 16 hours to resume his innings on 99, Conway needed just one ball to bring up the milestone, clipping the opening delivery of the day to fine leg for four to bring up his third ton in just five tests. 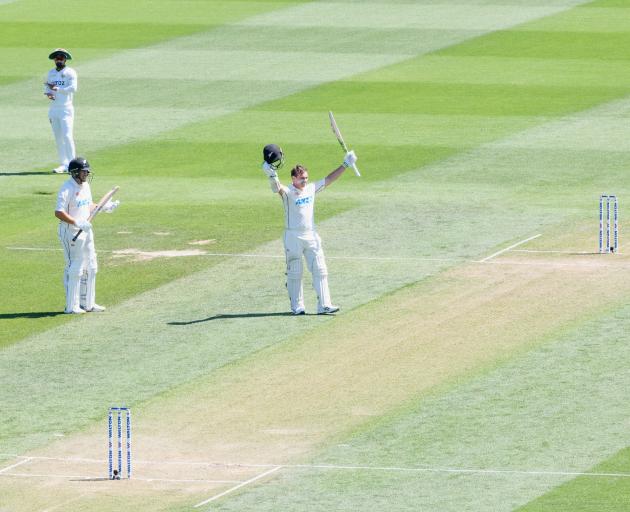 Tom Latham celebrates his double century on during the morning session. Photo: Getty Images
That was the best part of his day, with the worst shortly to follow as he was run out by Latham, who attempted a needless quick single. Mehidy Hasan Miraz charged in from cover and produced a direct hit, removing Conway for 109 and sending out Taylor to a standing ovation from the Christchurch crowd and a guard of honour from the Bangladesh players.

Taylor's trademark quick hands were on display with cuts and flashes through point, but his innings lasted only 39 balls, flicking a ball from Ebadot Hossain straight to square leg, and having to depart for 28.

Whether he'll get another innings remains to be seen, but the crowd savoured the moment as if it were his last, celebrating him off the park.

There was no such applause for the return to the pavilion of Henry Nicholls (zero off four balls, inside edge to keeper) and Daryl Mitchell (three off 11 balls, outside edge to keeper), with the Black Caps falling from 411-2 to 423-5, but Tom Blundell's counter-attacking 57 not out off 60 deliveries provided Latham with a partner to rack up further milestones.

If Latham truly wanted to get 300, he probably could have, but he instead opted to try and score quickly. In three balls from Mominul Haque he raced from 236 to 252, but was out the next ball attempting a fourth mighty swat.

It brought back memories of Kane Williamson's 251 against the West Indies in 2020, in which the skipper started batting recklessly when 300 was within reach, trying to force the pace for a declaration while also perhaps not wanting to look like he was selfishly putting his individual milestone ahead of the team's performance.

Mark it down in your scorebooks as "Tom Latham c Humility b Selflessness 252", but much like Williamson, who won that test within four days, it turned out there was no need for Latham to rush.

Within seven overs, Boult and Southee had taken two wickets apiece, and Bangladesh were 11-4.

Boult's first two wickets were both caught by Latham at second slip, with Shadman Islam hanging his bat to a scrambled seam delivery and Najmul Hossain Shanto being squared up by late outswing, while Mohammad Naim's first test innings lasted five deliveries and Mominul fared only three balls better, both having their stumps displaced by Southee.

Liton Das departed the second ball after tea, and while Yasir Ali and Nurul Hasan rescued the visitors from 27-5 with a 60-run stand, Nurul was trapped lbw to Southee for 41 and wickets tumbled after that - including Mehidy bowled by Boult, who ended with 5-43 to ensure that a triple century was celebrated after all.