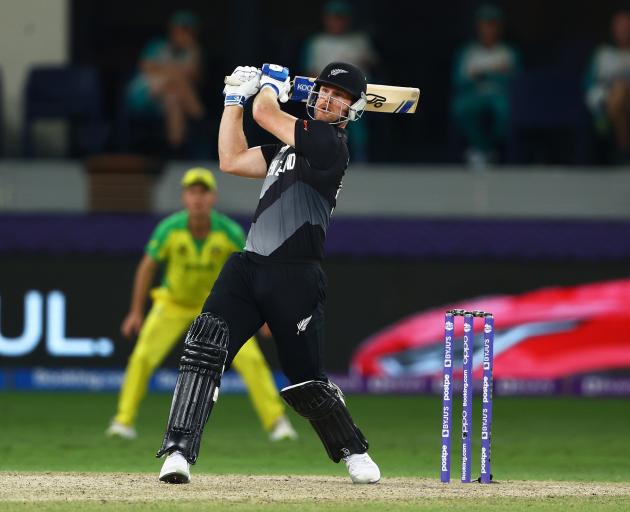 Jimmy Neesham tees off during the World T20 final between the Black Caps and Australia, the last time the two teams faced off. Photo: Getty Images
The Black Caps' tour of Australia has been postponed, just days before the squad were set to depart.

The Black Caps were scheduled to play three ODIs against Australia, the first starting on January 30, as well as a sole Twenty20 on February 8.

However, the tour was originally planned to coincide with quarantine-free travel between the two countries, and the Black Caps opted not to book MIQ places as a precaution, with cricket having already taken up a large chunk of MIQ space via touring men's sides and the participants in March's Women's Cricket World Cup.

With the Omicron variant wreaking havoc in Australia, the prospect of quarantine-free travel has been pushed back until at least the end of February, leaving the Black Caps in a situation where they could have been stranded in Australia at the end of their tour.

Various proposals were considered in conjunction with Cricket Australia, including extending the tour in order to move a scheduled New Zealand T20 series to Australia, so that the Black Caps could return home at a time more manageable for the MIQ process.

However, the Government confirmed today it had no capacity to meet the request, having on Monday night postponed the next MIQ release due to concerns over Omicron, effectively closing the border to those without a spot already booked.

New Zealand Cricket chief executive David White said the changes in quarantine plans left too much uncertainty for the tour to proceed.

"NZC and CA had explored a proposal to expand the tour and to push out the date on which the squad might return to New Zealand, in the hope that might be more achievable for the Government.

"But we received advice this morning that they could not provide certainty over this, either."

The Black Caps were set to send a team to Australia without any of their test stars, due to the tight timeframe between the end of the Australian series and two home tests against South Africa, starting on February 17.

Retiring Black Caps great Ross Taylor had decided to play in the Australian ODI series instead of the tests, and while it would be a surprise to see he and the Black Caps change their plans and Taylor reintegrated into the test fold, should there be any injuries amongst the test batsmen, perhaps Taylor could get a nudge to extend his test career.

Discussions are continuing with Cricket Australia over when the postponed fixtures will be played, with Taylor likely to miss out on his overseas swansong and finish his career with three home ODIs against the Netherlands in March and April.

The Black Caps have played just seven ODIs since the 2019 World Cup with Covid-19 and the security threat in Pakistan last September hampering their planned schedule.

The last time New Zealand toured Australia for an ODI series in 2020, the opening match was played in Sydney in front of an empty stadium before the pandemic forced border closures and a cancellation of the series.

The Black Caps' three home Twenty20 clashes against Australia remain scheduled for March – Omicron permitting – while the South Africa tests will go ahead, with the visitors having booked their MIQ spots.