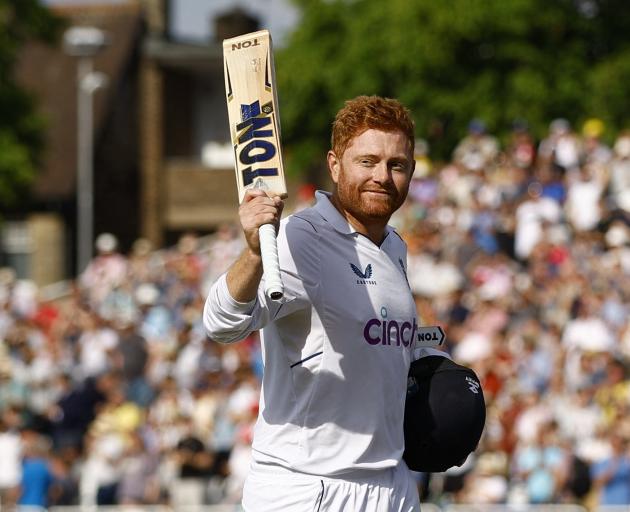 Jonny Bairstow acknowledges the crowd as he leaves the field at Trent Bridge. Photo: Action Images via Reuters/Andrew Boyers
Jonny Bairstow blasted a match-winning 136 from 92 balls to lead England to a remarkable five-wicket, second test victory over New Zealand, clinching the three-test series.

New Zealand were bowled out for 284 before lunch on Tuesday, setting England a target of 299 to win - the highest ever to claim a test victory at Trent Bridge.

It was a challenging target but England reached it in just 50 overs after Bairstow and skipper Ben Stokes (75 not out from 70 balls) made hay in front of a packed crowd.

The match set the record for the most boundaries in a test match with 250 in total, including 24 sixes.

England were 139 for four at tea, having lost leading batsman Joe Root for three, with the game in the balance.

But then Bairstow and Stokes ripped the New Zealand attack apart in devastating fashion, hammering 102 in the first nine overs after the interval.

Stokes was hampered by a knee injury, but with Bairstow taking the lead, their partnership was worth 179 runs in 20.1 overs.

Bairstow flew to his century in 77 balls - the second fastest test century by an England player, one ball slower than Gilbert Jessop's record against Australia at The Oval in 1902.

"It was great fun, one of those things when you get in that mood, just go with it. Do or die, so you've got to do," said Bairstow.

The Yorkshireman finally departed to a standing ovation after he was caught behind off Trent Boult, having hit seven sixes and 14 fours.

Stokes and Ben Foakes took care of the remaining 27 runs to soak up the cheers of a crowd that had been given free tickets for the match.

The win was a vindication of the positive approach taken by skipper Stokes and new Kiwi coach Brendon McCullum - himself known for aggressive attacking cricket.

"Today was set up perfectly for how we want to go about it, run into the danger rather than back away or stand still," said Stokes.

England had won just one in 17 tests before appointing Stokes and McCullum in May and the pair have won their first two matches with an attacking approach with both bat and ball.

"There are going to be times when it doesn't come off. That's part and parcel of it," said Bairstow.

"We just looked at it like a one-day game. The pitch was good, the outfield was fast. With the players we have, the brand of cricket we want to play, days like today are very exciting. If this is happening now, it's going to be some journey," he added.

The tone was set by opener Alex Lees, who struck three boundaries off the opening over from Tim Southee but then Zak Crawley fell victim to Trent Boult before lunch, edging the left-armer to Tim Southee at slip.

Ollie Pope, the first innings centurion, was caught behind off the impressive seamer Matt Henry for 18 but New Zealand's spirits were truly raised when they claimed the wicket of Joe Root.

Boult produced a fine caught and bowled with Root finding a leading edge to leave England at 56-3.

Lees had struggled for runs after lunch but was just getting into his stride again when he was caught behind off a fine delivery from Southee - the seamer's first wicket of the test.

Then came the Bairstow and Stokes show and the air of tension and apprehension was rapidly turned into an exhilarating festival of audacious big hitting.

New Zealand were left to ponder how they had lost the match after making 553 in their first innings but their decision to attack Bairstow with short pitched bowling after tea - and to stick with that approach while he peppered the stand - will feature heavily in their post-mortem.

The tourists were without their captain Kane Williamson in this test, after he tested positive for Covid-19, and seamer Kyle Jamieson was unable to bowl in the second innings due to a back injury, but this will be a tough loss to recover from.

"At tea it was still in the balance but the way Jonny and Ben were able to play was outstanding," said stand-in skipper Tom Latham. 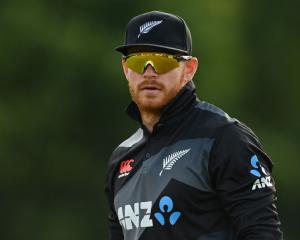