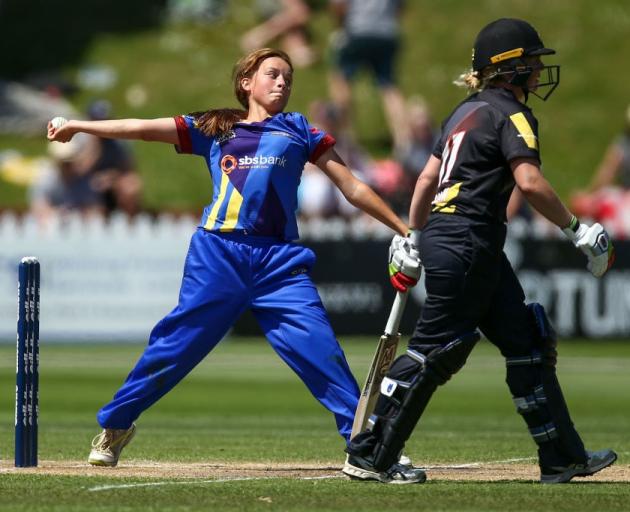 Bowler Eden Carson is one of nine Otago Sparks players to receive a domestic contract. Photo: Getty Images
It is more pocket money than remuneration.

But for nine Otago Sparks players the rewards will not come in only wickets and runs this season.

They have been offered domestic playing contracts for the 2019-20 season.

The contracts are a feature of the Women's Master Agreement announced last month and provide players with financial support to reimburse them for preparation and playing time.

The domestic retainers are worth $3250 each.

Otago Cricket Association performance and talent manager Simon Forde could not be reached for comment. But in a press release, he said the contracts were a positive step forward for the women's game in New Zealand.

''I am certain players will see that there is now a serious pathway beginning to emerge in the women's game which will inspire them to keep playing the game they enjoy,'' he said.

''Women's cricket will grow and we need to ensure that we are providing the necessary support and playing opportunities to ensure that athletes have the opportunity to develop. Contracts are a part of this.''

Otago's three centrally contracted White Ferns - Suzie Bates, Hayley Jensen and Katey Martin - will join the nine domestically contracted players to form the nucleus of the team for this season.

The Sparks get their campaign under way in the Hallyburton Johnstone Shield against champion Central Districts on November 16.