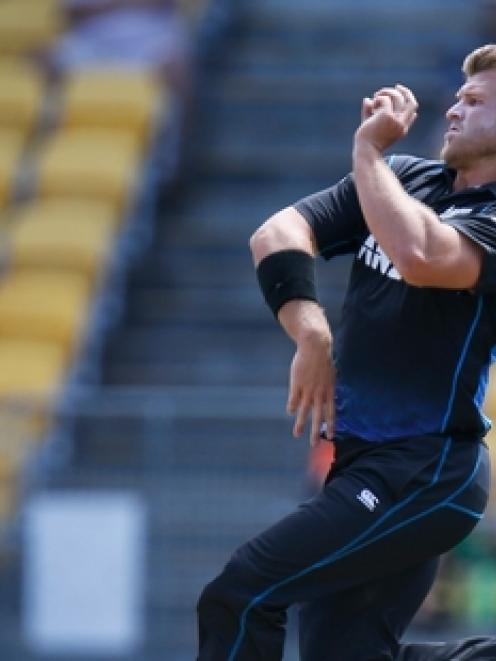 Corey Anderson
It may be coincidence or perhaps sub-conscious, but Corey Anderson's form has surged since he was dethroned as record holder for the fastest one-day international century.

Anderson brought the cricketing world to attention whacking a 36-ball hundred against the West Indies on New Year's Day 2014 in Queenstown. With that came the spoils of better sponsorship deals, lucrative Twenty20 contracts like his $866,000 Mumbai Indians coup, and a place in sporting folklore.

Yet barring his man-of-the-match winning 81 off 96 to help beat Sri Lanka in Christchurch last month, his form appeared to stall in the ODIs against South Africa in October and Pakistan in December.

On January 18, the West Indies may have inadvertently done him a favour. Their bowlers suffered further punishment, this time as South Africa's AB de Villiers dispatched them for a 31-ball ton.

In seven ODI innings this summer prior to De Villiers' demolition, Anderson averaged 19.86 at a strike rate of 86; in seven innings since, his average has been 35 and his strike rate 127.

Perhaps more pertinent to his all-round contribution has been increased bowling success.

There's a sound case to suggest lifting the weight of expectation as the game's quickest run-scorer has given Anderson an extra spring in his run-up.

This summer he had seven wickets at an average of 46.28 and an economy rate of 6.35 before January 18; he's taken 15 wickets at 16.93 since, while conceding 6.17 runs per over. His strike rate has dropped from a wicket every 44 balls to 16 balls and he has dismissed two or more batsmen in his last five games. In addition, his explosive arm hints at why he was a track and field talent at school. Batsmen need plenty of faith in their short-twitch fibres when considering two or three.

Anderson's resurgence must be put into the wider context of the team. By performing two key roles effectively, the 24-year-old has become a vital component from which captain Brendon McCullum can generate a game plan.

Another intangible factor is his oscillation between passive and aggressive with the bat. The 81 off 96 to beat Sri Lanka showcased him summing up the state of the game and playing with less bravado. He came in at 77 for four in the 12th over after McCullum had made an early impact. Contrast that with 75 off 46 balls against the same opposition to open the World Cup when he was given carte blanche from the 34th over with New Zealand 193 for four.

On the bowling front he has bowled five or more overs in six of the nine innings he's appeared this summer and hasn't shied from delivering at the death.

Anderson foreshadowed the importance of all-rounders as crucial to World Cup hopes during a recent interview.

"We'll be playing on [batting] friendly wickets from what we've seen. With high scores, a useful four to five overs with the ball or 40-50 with the bat will provide an advantage."

In congratulating De Villiers on taking his crown, Anderson held hope the record for balls faced in making an ODI century might diminish further.

"Never say never ... We've got the World Cup coming up, so it could be a good chance for someone else to take it down."

Perhaps he should reserve having a crack for now.

- Andrew Alderson of the Herald on Sunday in Wellington