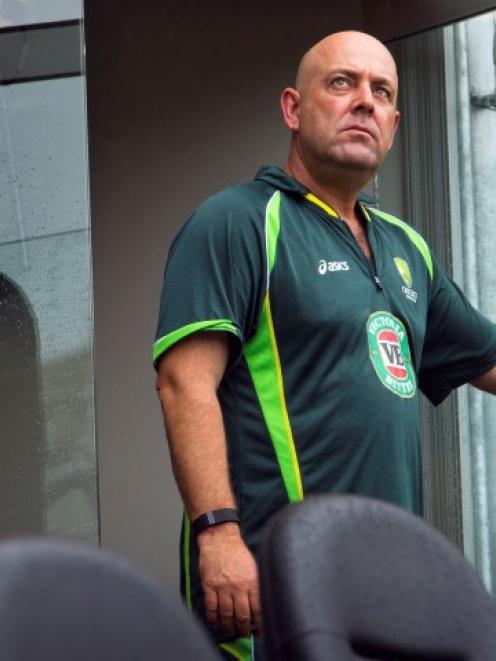 Darren Lehmann: 'New Zealand have been very impressive. It's going to be interesting to see how they play against us, I'm sure they'll be really aggressive, so it's going to be a cracker game.' Photo Reuters
Expect Australia to fight fire with fire when it comes to tackling the bristling Brendon McCullum in next weekend's bumper World Cup showdown at Eden Park.

Australia will back themselves to get the better of the most explosive top order batsman in the ODI game, with coach Darren Lehmann having a gentle dig at the New Zealand skipper.

"He does hit them a long way, doesn't he," former international batsman Lehmann said after New Zealand's demolition of England in Wellington on Friday night.

"He took the game on and he plays a high-risk game. But there's a bit of a difference between 135km/h and 145-150km/h coming at him. He's certainly going to come at us and we've got some plans for him. It's going to be exciting. New Zealand have been very impressive."

Australia arrived in Auckland last night but no one was talking. Lehmann could have been suggesting a change of pace to furrow New Zealand's brow, for example introducing spin with the new ball a la Dipak Patel in the corresponding World Cup fixture 23 years ago. But when your squad includes a core of fast, aggressive, well-performed bowlers that's unlikely.

So Mitchell Johnson, Mitchell Starc and Josh Hazlewood or Pat Cummins will be eyeing McCullum on Eden Park's postage stamp ground with electricity in the air from a packed 40,000.

Leftarmer Johnson's form is strong. He's taken 18 wickets in his last nine ODIs at 16 apiece. The last time the teams met in an ODI was at Nagpur in the 2011 World Cup, and Johnson took four for 33 and another express operator, Shaun Tait, three for 35 as Australia eased home by seven wickets.

This, however, is a vastly different New Zealand.

McCullum has scored 157 runs in his three cup innings to date off just 86 balls. Eighteen of them have whistled to the boundary; 11 have cleared them.

However New Zealand haven't faced anything of the calibre Australia possess in the cup.

New Zealand have dispersed until tomorrow for some well-earned time out. Australia, by contrast, have had their cup plans hit by Cyclone Marcia, which scrubbed out their game against Bangladesh in Brisbane on Saturday.

Lehmann has flagged the idea of arranging a practice game for his players who face the prospect of not having played a game in a fortnight when they step on to Eden Park.

Lehmann is also getting it in the neck from his old teammate Shane Warne, who has suggested the coach had become too powerful in on-field tactical planning.

"The captain is in charge. That's the way we're used to it in Australian cricket," said Warne, a good mate of captain Michael Clarke and a person with a low opinion of cricket coaches.

It doesn't pay to look too far ahead with Auckland's four-seasons-in-one-day weather. However the outlook is grim -- solid rain around the region until at least Sunday.