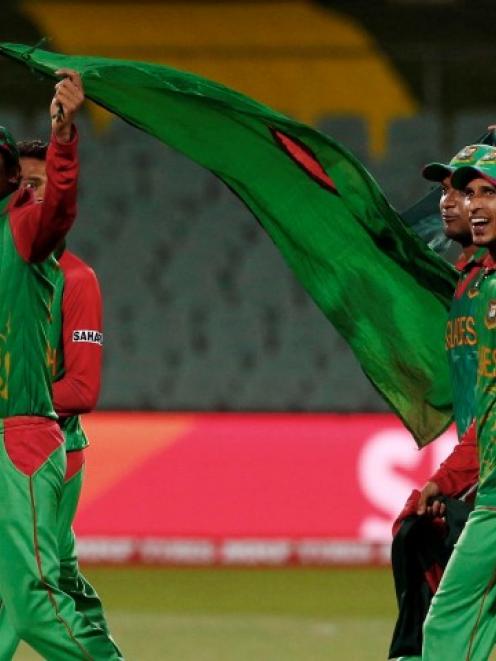 Bangladesh come into the New Zealand match on a high, having beaten England in their previous World Cup match. Photo Reuters
Bangladesh spin coach Ruwan Kalpage delivered a courteous sledge to New Zealand captain Brendon McCullum yesterday, saying he expected him to be out early in tomorrow's final World Cup pool game for both teams.

"He hasn't proven himself starting against spinners," Kalpage said. "It'll be tough, but we have plans for him."

The former Sri Lankan offspinner, who played 11 tests and 86 one-day internationals, is familiar with Seddon Park. He took his first two ODI wickets - John Wright and Rod Latham - on the ground at the 1992 World Cup.

He's right to take confidence from Bangladesh's 2010 and 2013 performances against New Zealand in Bangladesh. They have won the past seven completed one-day internationals and are coming off a 15-run victory over England in Adelaide, which guaranteed them a quarter-finals spot.

The next best record by another international team over seven matches against New Zealand is South Africa's five wins. Conversely, New Zealand won 3-0 against Bangladesh during the last series at home in 2010.

Kalpage hinted spin would get more of an opportunity for Bangladesh, having played four of their five World Cup games on faster-paced Australian pitches.

The success of India's Ravi Ashwin and Ravi Jadeja on Tuesday night in Hamilton will have spurred them, with captain Mahendra Singh Dhoni saying, "I think this [the Hamilton pitch] is the slowest New Zealand wicket we will see."

Kalpage's jovial slight against McCullum has merit, albeit it's been said about a player with three 50s, an average of 49.80 and a strike rate of 193 at this tournament.

The New Zealand captain has had limited success against Bangladesh. In 17 ODI innings, he averages 20.18. He's passed 50 against them only twice but the problems have tended to come against pace rather than spin. Incumbent opening bowler Rubel Hossain has dismissed him three times in seven matches.

Luke Ronchi described his wicketkeeping role as "the best seat in the house" yesterday.

"Every game, one particular bowler is doing well," he said. "It's awesome seeing the swing in action, and keeping to Dan is fun when you watch him work batsmen out.

"He doesn't turn it as much as he used to, which is a good thing for me."

Kalpage was also full of admiration for Vettori, but felt his side would be well equipped to deal with the 36-year-old's left-arm orthodox deliveries.

"He's proved himself to be one of the best in the world after coming back from injury, especially joining the 300 [ODI] wicket club. However, most of the teams he's played are full of right-hand batsmen. We've got a mixture, so that will be a good test going into the quarter-finals."