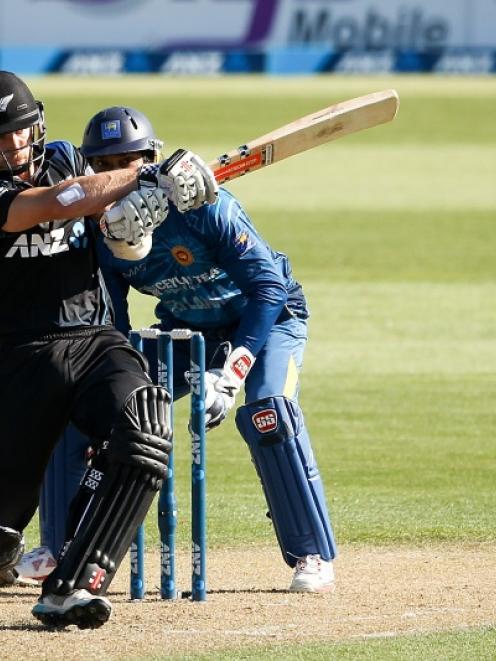 Kane Williamson of New Zealand bats during the One Day International match between New Zealand and Sri Lanka at Saxton Field in Nelson. Photo by Getty
A mature, measured and thrilling run chase drove New Zealand to victory by four wickets chasing 277 against Sri Lanka in the fourth one-day international in Nelson.

Luke Ronchi produced an inspirational 24 runs, including three straight sixes to turn the match in the hosts' favour in the 48th over. He finished on 32 from 15 balls and again proved his value as a closer to the New Zealand cause. Daniel Vettori hit the winning runs which left 11 balls to spare and enabled New Zealand to go 2-1 up in the seven match series.

The majority of credit, however, lay with The Metronome, aka Kane Williamson, who anchored the innings with 103 off 107 balls.

Tick-tock, tick-tock the singles came as he generated the rhythm, then he distilled twos to inspire belief, and finally he gifted himself the odd boundary as the team edged towards triumph.

Williamson's strokes for the most part appeared magnetised to the grass as he compiled his fifth ODI century. His first instinct was to push singles.

Anything else was a bonus.

He eased 41 of his runs behind square using the pace of the ball without forcing his strokes.

New Zealand's World Cup-winning prospects now look skewed on the basis of his presence. New Zealand were lucky to have him after speculation he could be rested with his minor shoulder injury.

In 14 ODIs since the start of last year, he has passed 50 on nine occasions and New Zealand have not lost (eight wins and one tie). In the five other results there was a win (Williamson made 47) and four losses.

Williamson and Elliott, with a reassuring 44 off 58 balls obliged to deliver a partnership of 88 for the fourth wicket. Between the 16th and 29th overs they scored 66 runs off 84 balls yet hit just two fours.

Corey Anderson reinforced the momentum with 47 off 44.

The New Zealand batsmen benefited from their bowlers' performance at the death.

Mitchell McClenaghan, Tim Southee and Anderson concede just 65 runs in the last ten overs and took six wickets. That extended to eight wickets for 96 in the last 16.2 overs.

The customary elegance of Sangakkara (76 from 83 balls) and Jayawardene (94 off 82) showed why Sri Lanka are a threat in the opening game of the World Cup and beyond in the tournament.

The pair oscillated between playing the ball along the ground and hitting in calculated fashion through the air. One stroke off Adam Milne was illustrative: New Zealand's fastest bowler delivered an effective short of a length ball and Jayawardene rocked back to late cut. The ball fizzed and swerved towards the third man boundary. Only some quality fielding from Grant Elliott saved an effortless four. Milne's pace was defused.

Milne spent some time off the field during the innings, apparently with sore ribs, but put together a tidy display with two for 28 from seven overs, enhanced by a wise review of an Angelo Mathews nick down the legside first ball to restrict Sri Lanka to 180 for four.

Milne complimented Southee's strong return of three for 59 from his allotment.

McClenaghan may have bowled too short early in the search for aggression, and dropped Sangakkara at short fine leg on 53 as New Zealand sought to reinforce the wicket of Tillakaratne Dilshan for 44 four balls earlier. McClenaghan resurged in his final overs to finish with two for 58, from 9.3 overs.

Brendon McCullum produced the innings highlights in the field. His chase-and-dive routine to save a boundary resulted in him smashing into an advertising hoarding with such an impact it echoed. The crowd erupted. Likewise his catch of Thisara Perera, running the length of a pitch to wide mid-off was a gem. He completed his display in the final over with the run out of Nuwan Kulasekara after spilling what would have been a candidate for catch-of-the-summer with a goal-keeper dive at mid-off.

Kulasekara couldn't be blamed for being distracted by the athleticism.

The fifth match is in Dunedin on Friday.

- By Andrew Alderson of the Herald on Sunday