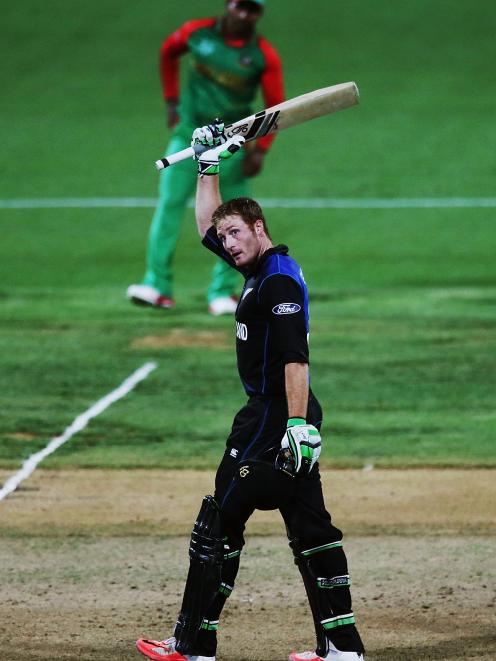 Martin Guptill of New Zealand celebrates after scoring a century during the 2015 ICC Cricket World Cup match between Bangladesh and New Zealand at Seddon Park
The World Cup keeps delivering the perfect valedictory for Daniel Vettori. Most of the time it's with the ball, this time it was with the bat, playing the crucial cameo of 16 from 10 balls to see New Zealand to a three-wicket victory over Bangladesh, chasing down the target of 289 with seven balls to spare.

An evenly-fought contest gave both sides a pulsating platform from which to launch their ambitions in the World Cup play-offs.

New Zealand learnt their bowling attack is not invincible in conceding 288 for seven but Martin Guptill (105 from 100 balls), Ross Taylor (56 from 97 balls), Grant Elliott (39 from 33 balls) and Corey Anderson (39 off 26 balls) gained valuable batting time after the early loss of Brendon McCullum and Kane Williamson.

Left-arm orthodox spinner and stand-in captain Shakib Al Hasan dismissed both on his way to figures of four for 55 from 8.5 overs. First, he lured McCullum into lofting to long-off and then Williamson lobbed a cut to cover point for one, the first time he'd been dismissed in single figures for 25 innings stretching to Boxing Day 2013 against the West Indies.

Guptill's century was his sixth in ODIs but the first time he'd reached the milestone at better than run-a-ball; he took 88.

Bangladesh, after victory against England, backed up with a batting performance that defied the odds after being 29 for two after the initial powerplay. Led by another century to Mahmudullah, they became the first team New Zealand has been unable to dismiss in six World Cup matches.

Initially a sense of déjà vu pervaded as New Zealand tethered Bangladesh in what has become situation normal.

The crowd could be forgiven for contemplating an early finish, keeping with the trend against Scotland, England, Australia and Afghanistan.

Such parsimony wasn't to last. Undaunted by New Zealand's bowling reputation, Mahmudullah finished unbeaten on 128 from 123 balls. He whirred into 12 fours and three sixes, backing up from 62 against Scotland and 103 versus England.

Two key partnerships fastened the innings together after a start which, after five overs, had registered four runs. Bangladesh continue to suggest they will be formidable quarter-final opponents.

Mahmudullah and Soumya Sarkar revived their cause fighting off the New Zealand bowlers - and an invasion of mosquitoes around the pitch block - in a 90-run third-wicket stand from 18 overs. The insect rebellion didn't discriminate. The New Zealanders called for the repellant to ensure no UFCs (unidentified flying creatures) disrupted a catch. As a whole it wasn't the hosts' best fielding performance, despite continued kamikaze efforts from McCullum in races with the ball to the rope. Too many 'harbour bridges' and puzzled looks permeated when balls sneaked through the in-field. Anderson's dropped second slip catch, when Mahmudullah, on one facing his third ball, was an example.

Mahmudullah and Sarkar stood up to New Zealand's bowling authority, particularly during overs 11-20 with 66 runs. Sarkar made 51 from 58, his maiden ODI half-century in his sixth match. Sabbir Rahman also produced a cameo of 40 from 23 in a sixth-wicket partnership of 78 from 48 balls.

Even Vettori endured rare punishment late in his overs. He bowled the first seven for 19 runs and removed Sarkar with an Anderson catch at long-on. However, his last three went for 23 as Bangladesh capitalised.

Boult also struggled later after dismissing the two openers. He delivered three maidens to start but conceded eight an over from his last seven.

Mitchell McClenaghan could be afforded sympathy in his none for 68 from eight overs as a late replacement for Adam Milne who rested his injured shoulder. McClenaghan exemplified the difference between net and match bowling. Conversely Anderson produced one of his better 10-over spells, taking two for 43.

McCullum's decision to field was logical. With the block sweating under covers the previous day there was every chance evaporating moisture would provide extra swing from Boult and Southee early.