Cricket: To change or not to change? That's the question 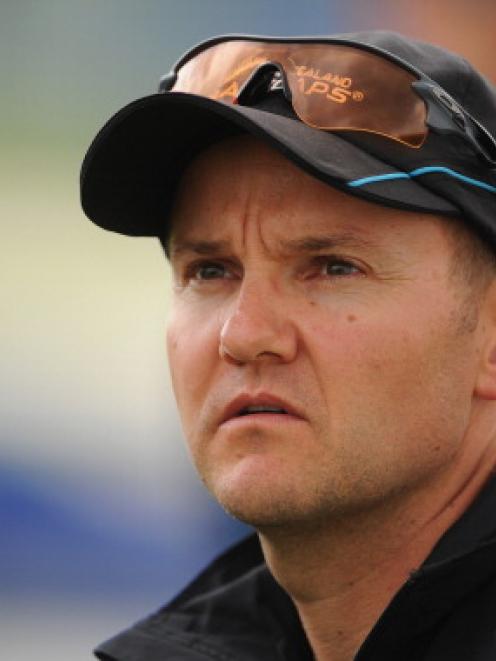 Mike Hesson
New Zealand were coy about revealing their favoured first XI in the leadup to the World Cup.

The first two games at the tournament have shown what they believe to be their best side.

So, is it completely out of the question that they might stay the journey for as long as New Zealand are alive in the cup?

The teams which make the final will be preparing for their ninth game in - in the cases of New Zealand, Australia, England and Sri Lanka, who were in action on day one - 44 days.

That's child's play for a New Zealand side who played nine warmup games against Sri Lanka and Pakistan over 24 days. Okay, that group was rotated throughout, but the point was they would have been expected to front up day after day if required.

"Those nine one-dayers we played were probably quite good for that. I think it's something we've prepared for," experienced batsman Grant Elliott said yesterday.

"The guys are fit, pretty young, in a good space and scrubbed up pretty well after those nine games. That was about getting ready for nine games in a row. The only concern might be the fast bowlers, but they're pretty fit so I don't see it as a problem."

New Zealand's coach Mike Hesson yesterday stuck to the standard line about picking the best team for the conditions against England tomorrow night in Wellington.

It won't have gone unnoticed that Kyle Mills turned in an impressive display there against Pakistan last month on a slowish pitch. Hesson said that the fifth fast-medium bowler, Mitchell McClenaghan, and offspinner Nathan McCullum would be part of the pre-game selection deliberations too.

After England, New Zealand have seven days off before facing Australia at Eden Park; then a further seven-day break ahead of the game against Afghanistan in Napier, and their group play ends against Bangladesh in Hamilton four days later.

"The first week is the toughest," Hesson said. "After that, there's big gaps so there's plenty of time for guys to rest up. But also we don't want top players sitting out two weeks without playing a game. So it's a balancing act."

One thought would be sticking with the first choice XI against England, and perhaps Australia if tomorrow night goes well, then jiggle things about for the final two group games.

If they don't, then Sod's Law says there will be an injury or two before the quarter-final or semifinal if New Zealand get that far.

Players who have been twiddling their thumbs for, by that point, over four weeks of inactivity would hardly be prepared properly.

That policy would be irresponsible, and that's not a term that rushes to mind when you think of New Zealand's back room staff.