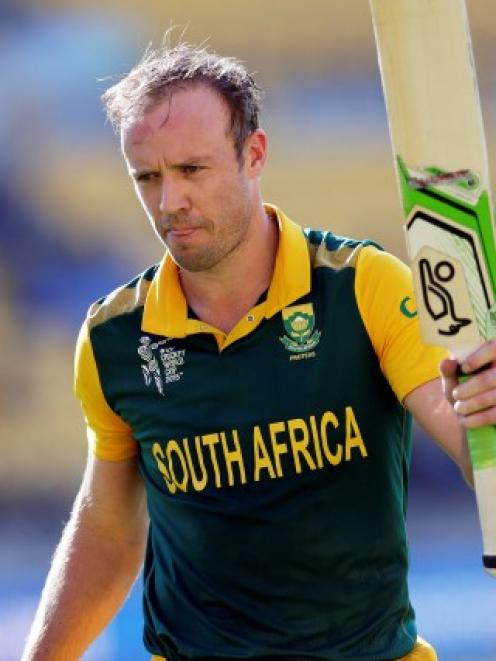 De Villiers had been the lynchpin of South Africa's 341 for six that was boosted by Farhaan Behardien's 64 from 31 balls to close out the innings, while UAE, who had won the toss and opted to field, never looked like threatening the target.

They slumped to 45-3 and then gave up any pretence of chasing the total, just like they had against Pakistan last week in Napier, preferring instead to avoid being embarrassed.

Swapnil Patil top-scored with 57 not out and combined in a 63-run partnership with Shaiman Anwar (39) as UAE were dismissed for 195 in the 48th over with Fahad Alhashmi unable to bat after injuring his ankle while bowling.

South Africa finished Pool B on eight points and have virtually guaranteed second place on net run rate behind unbeaten India and are likely to meet Sri Lanka in the first quarter-final in Sydney next Wednesday.

Pakistan and Ireland are both on six points before their final match showdown in Adelaide on Sunday.

West Indies are on four points and could sneak into fourth place, and a quarter-final showdown with New Zealand, with a big victory over UAE in Napier on Sunday, knocking out the loser of the Pakistan-Ireland match.

De Villiers had looked like he might score his second century of the tournament as he dominated two partnerships but fell one run short of his 21st century when he speared the ball straight to short third man.

The 31-year-old's dismissal with more than seven overs remaining stalled his side's momentum when they looked like they might be able to pass 400 for the third time this tournament.

They had lost both Hashim Amla (12) and Quinton de Kock (26) relatively cheaply, but their middle order kicked into gear against a tidy, but non-threatening UAE attack.

Rilee Rossouw (43) and David Miller (49), who shared in a 108-run partnership with De Villiers, both contributed before JP Duminy played the junior partner in a 53-run stand with his captain and 35 with Behardien.

Behardien guided South Africa past 300 and bludgeoned 23 of the 25 runs from the final over by Amjad Javed to record his third half century and highest score.