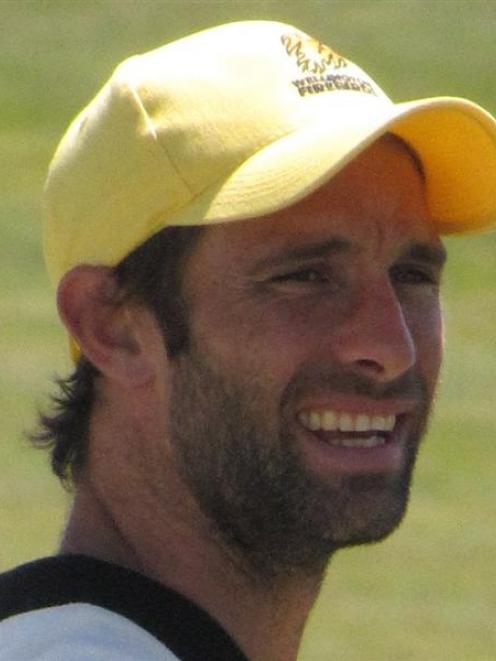 Grant Elliott: 'I definitely pay more attention in the field when I'm bowling. I feel like I'm in the game a bit more.'
Grant Elliott knows his place in the Black Caps bowling order.

If skipper Brendon McCullum throws him the ball, there's a chance that things have gone pear-shaped or he is needed to fill in some extra overs.

That's not a knock on Elliott's medium-pacers but more a reflection of how well New Zealand have bowled at the Cricket World Cup.

Seamers Tim Southee and Trent Boult have been in sublime form, while spinner Daniel Vettori has also wound back the clock during the past month.

Elliott has bowled seven overs across four appearances at the crease in six World Cup games. He took 2-27 against Bangladesh in New Zealand's most recent victory in pool play last Friday.

It was odd to see him given the ball late in the innings but he said the role of an all-rounder -- particularly from his Twenty20 experiences -- meant he could be summoned at any time.

"You're under the pump all the time in T20 when you're bowling so you have to develop the skills to try and curb the runs as much as you can," Elliott said.

"So whenever I'm required to bowl, I guess that's my role to come in and try and get a wicket or stop the flow of runs.

Elliott was considered a bolter when the World Cup squad was named but a string of useful performances in the lead-up matches against Sri Lanka and Pakistan justified his selection. He said contributing with both bat and ball was satisfying.

"I always enjoy bowling and batting. I think it complements my batting game. I definitely pay more attention in the field when I'm bowling. I feel like I'm in the game a bit more."

The unbeaten Black Caps will play the West Indies in their sudden-death quarter-final at Wellington Regional Stadium on Saturday.

Elliott, who will celebrate his 36th birthday on Saturday, said New Zealand had taken a measured build-up to the contest.

"I think our group is very level in the way we approach every game."

New Zealand had a rest day yesterday and trained at full steam today. Elliott copped a stray ball to the arm when he was batting in the nets but said he was fine.

The Black Caps have regularly given their players short breaks out of the team environment at the World Cup and the Wellington-based Elliott said it had been nice to go home this week.

"I'm looking after the two kids and wife at home, so I'm fairly busy," he said.

The West Indies are a tricky opponent for New Zealand given the inconsistent nature of their performances and when they click they have a range of players who can cause problems.

The Black Caps have completed their scouting on the West Indies and Elliott said they had to rely on what had worked for them at the World Cup.

"The danger in these knockout stages is you can get too result-driven," Elliott said. "Obviously the result is the most important thing but it's about the processes."

Elliott said the side had noticed the wave of support growing behind the team as the tournament reached the business end.