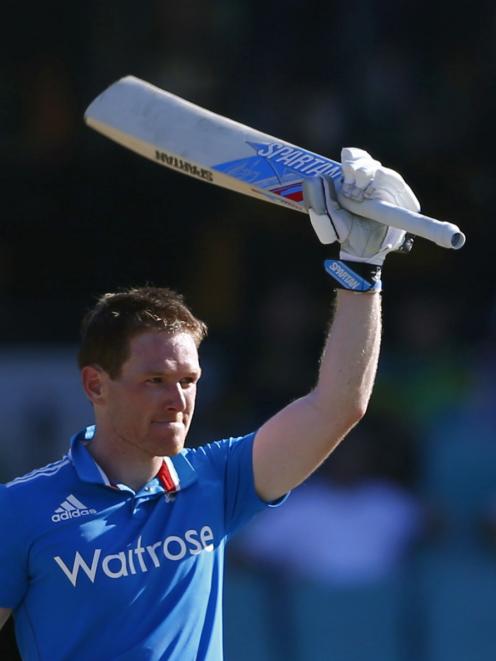 Eoin Morgan
New Zealand are rolling along nicely; England are all over the shop right now.

That said, New Zealand will be sure to have their guard up when the teams meet at Westpac Stadium in Wellington tomorrow.

There is huge anticipation building ahead of the transtasman showdown at Eden Park late next week, but New Zealand are determined they don't get ahead of themselves.

England are in a fug at present with their ODI cricket. Australia spanked them at the Melbourne Cricket Ground on the opening day of the World Cup by 111 runs.

They got shot of their captain Alastair Cook shortly before the tournament, but his replacement, Eoin Morgan, a fine, inventive batsman, has had a rotten patch since hitting 121 against Australia in his first game in charge.

When England were greeted at a reception on their arrival in Wellington, Morgan was referred to as Eion Rogers during the welcome speeches.

If it implied he is an unknown, Morgan will fancy letting the city know plenty about him tomorrow night.

"They've obviously got a lot of quality players, some in form, some not," New Zealand coach Mike Hesson said yesterday.

"Their seam attack has got pace and bounce and a pretty good mix, and they bat deep. They're a dangerous outfit."

The teams met seven times in 2013, England winning four of them, two at Napier and Auckland.

England also won their last clash with NZ, in the Champions Trophy in Cardiff that year.

With the exception of the steady Tredwell and Bopara, the other six are game breakers.

New Zealand captain Brendon McCullum spoke the day before the opening game against Sri Lanka of match winners who litter all the major players at the cup, England no exception.

"We've had good battles with them over the years. I expect another on Friday," Hesson said.

A statistic worth considering: over the first five games of the cup, the average total for the first 10 overs by full member nations batting first in the cup is 50.60. The average for the final 10 is 112.

Bad news for England. They have been bowled out 12 times in their past 18 ODIs.

New Zealand, having had their rough batting display against Scotland on Tuesday, are confident they'll be back on message tomorrow tonight.