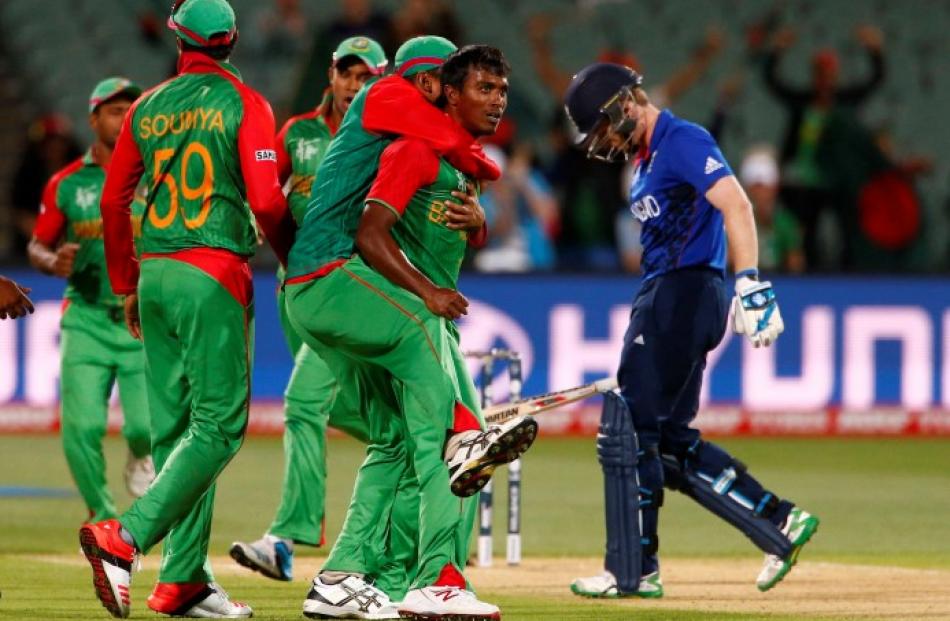 So England became the first punchline of the World Cup.

A team not lacking in talent, England proved admirably that planning and purpose have as big a role to play, than being able to play a cover drive or bowl a nip-backer on a good length.

It is difficult to conceive that a team with that many resources, in every respect, could botch a campaign so badly… but they did.

In scenes reminiscent of plane loads of Kiwis turning up to Paris for the semifinal of the 2007 Rugby World Cup only to learn upon landing of the Cardiff Calamity, hundreds of English will today be landing in Sydney all dressed up but with nowhere to go.

This World Cup was designed so that the big teams couldn't possibly miss the quarter-finals, so to do is one heck of an effort.

Speaking to a prominent cricketer last week, they were of the opinion that England had turned up with a game plan that could be explained as thus: "The batsmen should score runs and let's hope the bowlers take wickets."

They were clearly gobsmacked not at how badly England were playing, but how they were playing.

It is incredible, with all the data and analysis available to even the less wealthy nations (read, new Zealand), that England could turn up and think a top-order that contained Ian Bell, Moeen Ali, Gary Ballance, Joe Root, Eoin Morgan and James Taylor, was going to be capable of posting the sort of totals that are competitive in modern one-day cricket defies belief.

Finally England got proactive last night, bringing in the big-hitting Alex Hales for balance, but they didn't open with him, where he could have set the tone. Instead England got perfectly pleasant batting from Ali and Bell. Jos Buttler, a man capable of lighting up attacks, remained under camouflage at No 7 for the tournament.

No, England's star bowlers didn't perform. It was a horror tournament for Stuart Broad and James Anderson, but they could have been bowling somewhere close to their peak and they would have struggled to defend England's ultra-conservative batting approach.

So England and their mostly wonderful fans will have to content themselves with a final Pool A hit-out against Afghanistan, a match that should be a decent, even contest.

And that's no joke.