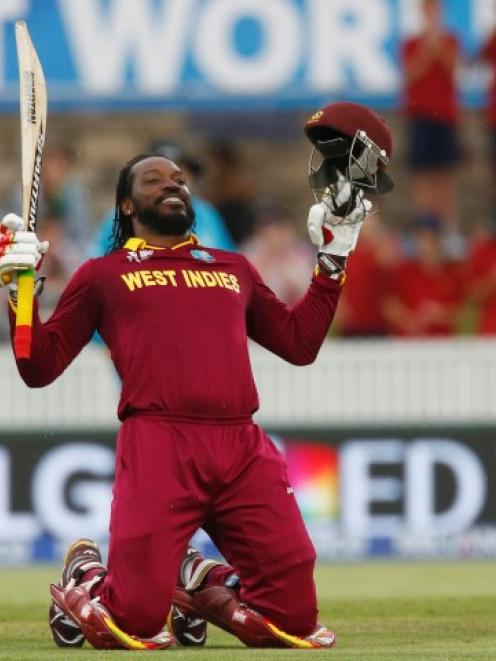 Chris Gayle celebrates reaching his double-century against Zimbabwe in Canberra. REUTERS/David Gray
Chris Gayle rediscovered his mojo in spectacular fashion on Tuesday with the first World Cup double-century to drive West Indies to a 73-run victory over Zimbabwe in their Pool B clash at Manuka Oval.

The opener's 215 was the highest individual innings in a World Cup match, the third highest in any one-day international, and formed the large part of a 372-run partnership with Marlon Samuels (133 not out), also an one-day record.

The dreadlocked 35-year-old slugged 16 sixes -- tying the one-day record -- as well as 10 fours in his 147-ball knock and even though he was dismissed with the last ball of the innings, West Indies were set fair at 372 for two.

Zimbabwe had their run-chase trimmed to 363 from 48 overs under the Duckworth-Lewis method after rain briefly interrupted the contest and they initially made a good fist of it.

Brendan Taylor was unfortunate to be dismissed for 37 after a controversial third umpire referral and middle order batsmen Sean Williams (76) and Craig Ervine (52) also put in good shifts.

When Gayle (2-35) returned with the ball to dismiss Ervine and Stuart Matsikenyeri (19) with his off-spin, however, the writing was on the wall for Zimbabwe and they were all out for 289 in the 45th over.

After starting their campaign with an embarrassing upset at the hands of Ireland, West Indies look on course for a place in the quarter-finals after impressive wins over Pakistan and now Zimbabwe.

The match had started well for the Africans with Tinashe Panyangara bowling Dwayne Smith for a duck on the second ball and coming within a whisker of dismissing Gayle lbw in the same over.

Gayle, under fire after a poor run of form, made the most of the reprieve even if the stifling of his aggressive instincts meant his 22nd one-day century was by no means the most fluent of his career.

Once he reached the milestone with the first ball of the batting powerplay, however, he punished the Zimbabwean bowlers as only he can, smashing the ball around the ground almost at will.

He had brought up his 50 and century with singles but it was with a four that he reached the historic double century in the 46th over, the first non-Indian to achieve the feat.

Samuels, meanwhile, was caution personified for most of his 156-ball innings until finally cutting loose as he and Gayle hammered 152 runs off the last 10 overs.