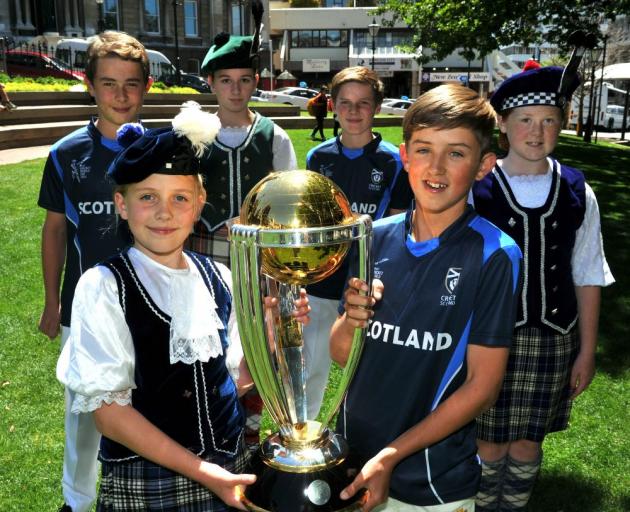 Eva Sincock (9, front left) and Tommy Wilson (13) hold the World Cup trophy in Dunedin yesterday. From back left: Harrison Briggs (13), Jerah Todd (12), Beckham Greenall (12), and Bridget Dalley (12) are also pictured. Photo by Gregor Richardson.
Scotland should feel right at home when it is officially welcomed to the Edinburgh of the south next month.

The associate team is scheduled to play two of its six pool games in Dunedin - against the Black Caps on February 17 and Afghanistan on February 26.

Each of the 14 teams in the competition will be officially welcomed to the country in one of the 14 host cities, and World Cup media and public relations manager Philip Clark said it made sense for Scotland's welcome to be in Dunedin.

''What Dunedin has got planned for the team welcome is fantastic,'' he said.

''Obviously Scottishness is a quintessential part of what makes Dunedin fantastic.

'' Having those two Scotland games, having the team welcome, it makes a tremendous amount of sense.

''It's a great opportunity for the city and we're all looking forward to it.''

Scotland's welcome will be held by the Robbie Burns statue in the Octagon on February 15, and the St Andrew's cross will be flown from the Municipal Chamber's flag pole.

''Dunedin looks forward to showing the Scottish team that while they're here a long way from their home, they'll get the warmest of Dunedin welcomes,'' she said.

''This is an ideal opportunity to engage Dunedin's diverse community groups to participate in events associated with their cultural heritage and to celebrate our host city status with family fun and colourful events.''

Scotland will play its four other matches in Christchurch, Nelson and Hobart.

The ICC World Cup trophy arrived in Dunedin for the sixth time before the tournament yesterday.

It will be on show at today's and Sunday's one-day internationals, as well as the women's national twenty20 final between the Otago Sparks and Wellington Blaze, at the University Oval tomorrow.