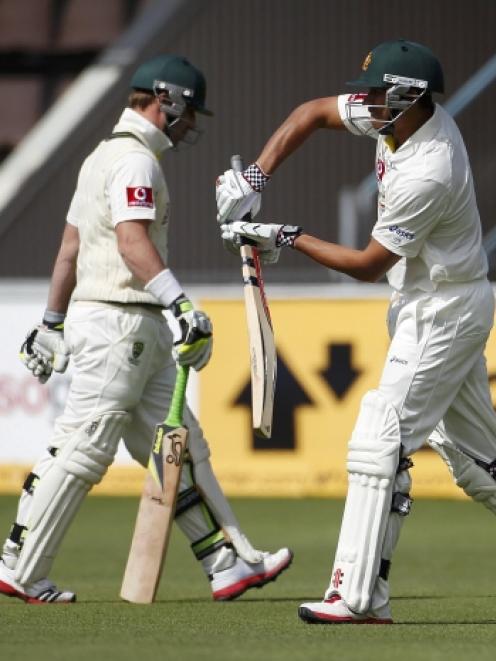 Australia's Phil Hughes (L) passes incoming batsman Usman Khawaja after he was dismissed by New Zealand bowler Chris Martin during the second test at Bellerive Oval in Hobart today. REUTERS/Daniel Munoz
All Phil Hughes wanted was to be taken seriously as a test opener.

Instead he became the butt of jokes after - incredibly - being caught by Martin Guptill off Chris Martin for the fourth straight time.

There was a sense of deja vu when Hughes was caught in the slips for 20 off just the fifth ball he faced on day four of the second test in Hobart today.

There was also a sense of humour shown by punters - not that Hughes could see the funny side as he trudged off probably for the last time as a test opener.

As a batsman, Martin makes a great bowler - he has 32 test ducks to his name.

And that only made the polarising Hughes' dismissal all the more sweeter in some eyes.

"Initially thought Chris Martin was giving Phil Hughes a send-off - turns out he was giving him some batting tips," someone tweeted.

Remarkably Guptill has caught Hughes in two different positions during the series - at gully in the first test in Brisbane, and at second slip in Hobart.

"If Phillip Hughes was cheating on his girlfriend Guptill would be the one who caught him out!" another tweeted.

On and on it went as Hughes quickly trended on Twitter.

"If Phil Hughes gets a nick shaving tomorrow morning, Martin Guptill will appear from the medicine cabinet," he said on ABC Radio.

Of course Hughes' fate is no laughing matter.

It seems inevitable that Hughes will be sent back to Sheffield Shield to work on his technique - and there are no prizes for guessing where he can start.

Hughes has been caught behind the wicket 21 times in 31 test dismissals and nine out of 12 on home soil.

The 23-year-old's gutsy 88 against South Africa in Johannesburg last month must seem like an eternity ago for him. 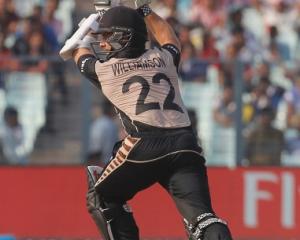 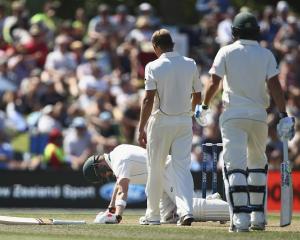 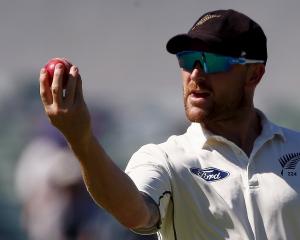