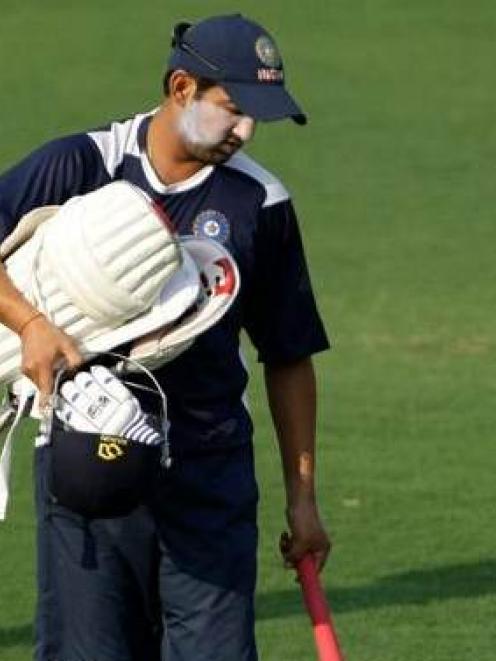 Indian batsman Gautam Gambhir arrives for a session at the nets in Nagpur, India. (AP Photo/Gautam Singh)
India refuses to accept that opener Gautam Gambhir has lost his appeal to overturn a one-match ban for elbowing Australian all rounder Shane Watson during the third Test.

Under ICC regulations, the appeal verdict is final and cannot be questioned by a player or his board.

However, the Board of Control for Cricket in India (BCCI) has called Sachs' decision into question.

On receiving notification that Gambhir's one-match ban would stand, ruling him out of Thursday's final Test against Australia in Nagpur, the BCCI released a statement protesting the verdict, saying it would not be accepted.

"The said order has been passed without affording the player an opportunity of personal hearing, legal representation and without acceding to his request for certain documents/recordings to be given to him and also denying him an extension of time," BCCI honorary secretary N Srinivasan said in the statement.

"On receipt of the order, the Board has refused to accept the decision of the Ld. Appeals Commissioner and has sent its objection to the ICC. " The two-page letter was also released, including a list of issues with the process, including the failure of the ICC to accept Gambhir's request for a full hearing, or to pass on to him and his legal representatives copies of the documents and video footage related to the incident.

"I submit that the decision/order of the Ld. appeals commissioner is void ab initio (to be treated as void from the outset) and non est (non existent) as it contravenes mandatory provisions relating to hearing of appeals and also as being in violation of principles of natural justice," Srinivasan wrote.

The BCCI has named Tamil Nadu opening batsman Murali Vijay as an addition to the squad for the fourth Test, presumably as cover for Gambhir.

However there is a chance that India's strongly worded rebuke to the ICC will be a forerunner to their selecting the ineligible Gambhir to play in Nagpur, a situation that arose in 2001 when the banned Virender Sehwag was chosen to play against South Africa at Centurion Park despite his ban for over-appealing.

On that occasion match referee Mike Denness, who imposed the ban, was locked out of the ground and the match declared unoffical by the ICC.

The ICC's code of conduct leaves no room for doubt on any further process following the result of an appeal, as section 11F of the code states: "The decision of the Appeals Commissioner shall be final and binding. "

Gambhir was found guilty of conduct not in the spirit of the game for elbowing Watson during India's first innings in the third Test in Delhi last week.